Hwang speaks candidly on ‘Kill Me’

Hwang speaks candidly on ‘Kill Me’ 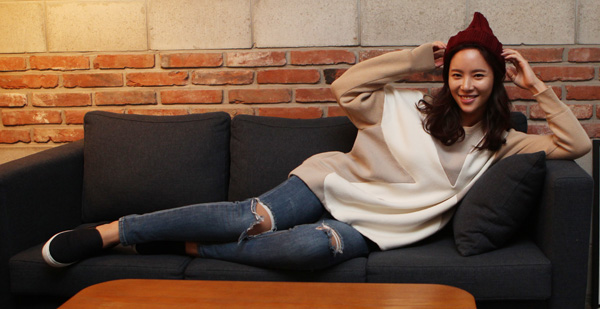 Actress Hwang Jeong-eum is known for her candidness during interviews.

But she had only good things to say about the male lead, Ji Sung, as well as the director and the rest of the production crew of the recently concluded MBC drama “Kill Me, Heal Me.”

Hwang played Oh Ri-jin, a psychiatrist who falls in love with Cha Do-hyeon, a young and handsome heir to a large, wealthy conglomerate who suffers from multiple personality disorder.

This was the second time for Hwang and Ji to play a couple in a drama after 2013 KBS series “Secret.”

Hwang hailed Ji Sung, calling him “the best” and saying he’s an inspiration.

Q. How does it feel to finish filming “Kill Me, Heal Me”?

A. I’m so happy. It was a piece that made me honored just to be part of it. It was hard, but I kept track of all the reviews during breaks. I also waited to catch the drama [on TV], which was the first time I did that with any drama I’ve been in. I was impressed by how it came out, and I think the production crew is genius to be able to do that in such a short period of time.

You played alongside Ji Sung just two years ago. What was that like?

I have so much to learn from him as an actor. It must have been really challenging [to portray a person with multiple personality disorder], but seeing him act I could see he’s in that level. If it were me, I wouldn’t be able to do that, especially given that we slept about 30 minute to an hour every day during filming.

Would you play a couple with him again?

Definitely - but maybe in four years’ time. He’s married now. So maybe we can play a couple after I get married, too. One thing I really like about him is that he always patiently explains things I don’t get. For me, I can’t act when I don’t understand. He always explains so patiently and kindly.

Frankly, it was hard, mostly because I didn’t have the lead or the control over the flow and the situation.

Some people described it as Ji Sung’s drama. Why did you choose the piece?

I didn’t want to take on a comic role after the 2009 MBC sitcom “High Kick,” mainly because I thought I was older and should take on more serious roles. But these days I’m drawn to roles with both a lighthearted and funny side as well as serious and profound facets. The Oh Ri-jin character had that mix. Also, this drama had a Chinese investor, and I wanted to expand my activities in China. I had that in mind, too.

What do you think was one of the best lines from the piece?

You said you want to meet Ji-Sung again, married. So marriage is in the plan?

Yes. But I want to go with the flow and let things happen naturally. I want to get married at 33 or 34 with someone I’m dating then. I think it could be Yong-jun [Hwang’s current boyfriend of the band SG Wannabe].