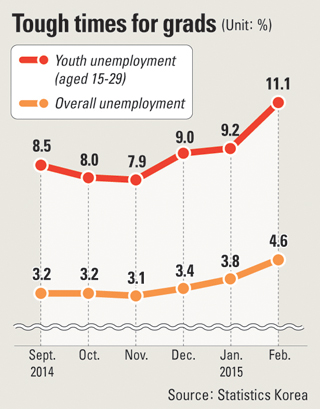 The jobless rate for people between 15 and 29 was 11.1 percent in February, according to data released by Statistics Korea Wednesday. That was the highest since the government started compiling unemployment statistics in their current form in 1999.

The overall jobless rate in February also grew to 4.6 percent, the highest since 2010, the data said.

The number of unemployed people totaled 1.23 million in February, jumping from 988,000 in January.

The so-called real jobless rate - officially called “employment reference index 3” - also rose to 12.5 percent in February, at its highest level since the government adopted the estimates last year. The figure includes part-timers, contract workers and those who have given up looking for a job. It also includes people who pursue more education because they can’t find a job.

The official jobless rate only includes people who have looked for a job for the past four weeks without working a paid job and are available for employment immediately.

Government officials said the increase in unemployment in February was largely due to calendar effects such as graduations from universities.

“Most university graduations fall in February, so many students are seeking jobs early in the year,” said a Statistics Korea official by phone. “Also, many young job seekers want a decent, regular job, so they choose to prepare for employment [after graduation by studying] rather than hurrying to get any job.”

The increase in the jobless rate was just the latest bad news about the Korean economy. In February, the inflation rate was also the lowest in 16 years, 0.5 percent, despite a hike in cigarette prices. Consumption dropped by 3.1 percent, imports fell about 20 percent and exports slumped by 3.4 percent.

In the midst of an economic slowdown, the nation’s top conglomerates are reluctant to increase new jobs, according to a poll by the Federation of Korean Industries on Monday. Human resources representatives at 30 Korean conglomerates were surveyed and 19 said they will cut their entry-level jobs this year from a year earlier.

The survey said business leaders feel pressured by the government’s call for them to increase base wages and a new law to be enacted in 2016 extending the retirement age to 60.

“Companies have little capacity to add new jobs at the moment,” said Lee Cheol-haeng, head of the Labor Welfare Team at the federation. “The increase in base salary calculation raised the average wage of conglomerates by 10 percent, and the extended retirement age means companies will have to pay the salaries of more middle-aged employees, which is three times what they pay entry-level employees.”

The total number of people employed rose about 347,000 in February from a month earlier to about 25.1 million.

Kim Sung-taek, a labor market specialist at the Korea Labor Institute, said the increase in employment was ironic proof that Korea has a depressed economy.

“Previously, those part-time jobs were for young people, but now they are increasingly occupied by middle-aged people, also resulting in a drop in the youth employment rate,” he said.