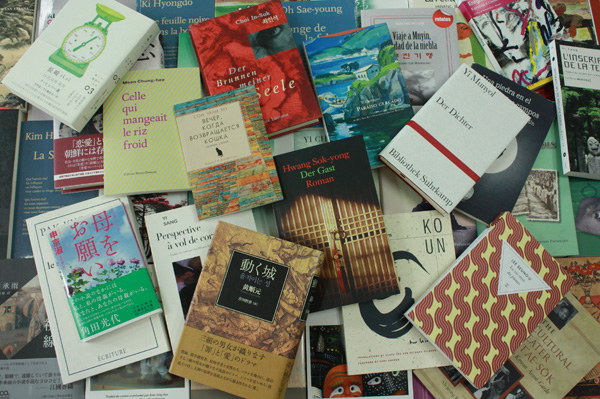 Korean author Shin Kyung-sook’s novel “Please Look After Mom,” a story about a missing mother and her grown-up children who search for her, achieved critical acclaim in North America in 2011 after the book was featured on the New York Times’ best-sellers list.

After its successful debut in one of the world’s largest book markets, the fictional tale is still being translated into different languages based on its initial success.

In May, the novel will be published in Finland.

Since it was around the time when local publishers and authors started to set their sights overseas, the success of Shin’s book was likely to have motivated people inside the literary circle. But insiders were also well aware of how difficult it is to achieve such a feat. 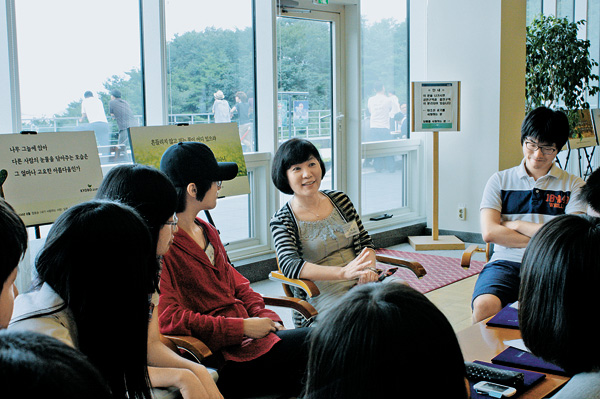 The Daesan Foundation holds a literary camp for teenagers every summer. About 80 adolescents stay at a camp with the authors who evaluated their fiction or poetry applications. Above, author Seo Ha-jin discusses literature with camp participants.

“In the North American book market, 97 percent of books are [originally] published in the English language while the other 3 percent are translated publications,” said Oh Eun-ji, an official working for the public relations team at the Literature Translation Institute of Korea.

The state-run federation translates Korean literature into more than 11 languages, including German, French, Polish and Russian, in order to reach more readers.

“We should appeal to the readers within that 3 percent,” Oh said. “We always aim high to make each publication a hit in a foreign country, but these projects are still carried out for marketing purposes for the most part.”

Oh believes that Korean authors should aim to have at least two of their works published in foreign languages in order to enhance their chances of being picked up by an overseas publishing agency, even though releasing translated Korean books is not particularly lucrative.

Yet the Daesan Foundation, a Kyobo Life Insurance cultural foundation, supports this project alongside the Literature Translation Institute of Korea.

The institute said the foundation is the only private company that does this job.

First established in December 1992, the Daesan Foundation supports people in the publishing world under the philosophy of Shin Yong-ho, the late chairman of the insurance company.

“My father loved books, literature and art. He also used to say that people make books, but books also make people,” said Shin Chang-jae, the CEO of Kyobo Life Insurance, during an interview in an in-company magazine marking the 20th anniversary of the foundation in 2012.

According to the incumbent CEO, his father, who was a sickly child, spent most of his childhood reading books. He believed literature would eventually enrich the spirits of Koreans.

One of the insurance company’s affiliates is Kyobo Bookstore, the country’s largest literary retailer.

Unlike other companies that sponsor a wide range of cultural projects, the Daesan Foundation focuses only on literature.

Its patronage is especially useful for young people who want to take on writing as a vocation.

“If you look at all the cultural sponsorships, they cover teenagers, college students, newbie and established writers stage by stage,” said Lee Jung-hwa, the foundation’s head of the cultural business department.

The first gives 50 million won ($44,314) each in prize money to winners of five categories - poetry, novels, critiques, theatrical plays and translations - for works considered to have literary value.

Only new releases are eligible for nomination. This year, books published between last August and this July will be selected and evaluated by judges.

Finalists will be announced in November.

Along with the prize money, each winner’s work is translated into major foreign languages, too.

If the Daesan Literary Awards is for established writers, the writing fund is for those who have been penning stories for less than 10 years.

The foundation also conducts a literary camp for teenagers every summer.

“About 1,000 teenagers apply for the camp by submitting their fiction or poetry,” said Lee. “We choose about 80 out of them based on their creations and they go on a camp for days.”

Lee added that what differentiates this camp from others of a similar sort is that authors who have assessed the teenagers’ work attend the camp.

Another major cultural patronage of the foundation is translating Korean literature into other languages.

Translators who are fluent in both Korean and another language can apply to the foundation until June 1.

Once chosen, they will receive a grant. The amount depends on the language they will be translating into.

The highest subsidy, 15 million won, is given to people who can translate into English, French, German, Spanish or Japanese.

While these two projects may seem like they would be quite similar, there are starkly different standards between the two projects.

“We try to support Korean works that are universal and have the characteristics of Korean authors,” said Lee.

“But when we choose foreign works, we try to select pieces from third-world countries that have value but could not hit the market for lack of popular appeal.”

Grants are also given to professors, students, literary institutions and researchers who study Korean literature.

In order to support these programs, the Daesan Foundation said it has allocated about a 2.8 billion won budget for this year.