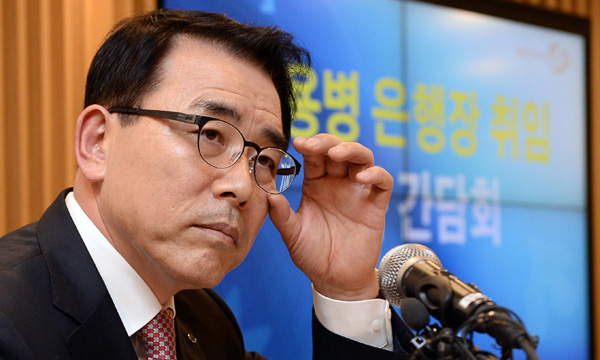 Cho, former CEO of Shinhan BNP Paribas Asset Management, was appointed CEO by Shinhan Financial Group’s board members last month in recognition of his experience in the subsidiary’s global business.

“It’s more difficult for banks to go across borders,” Cho said Wednesday at his first press conference, held at the bank’s headquarters in central Seoul. “But I think I have been chosen to lead the bank with the goal of becoming a real global bank, so it will be my main focus.”

It’s harder for banks to enter foreign markets because it is a long-term task that requires the establishment of infrastructure and transfer of manpower, he continued, particularly when comparing it to globalization in the asset management business.

Shinhan Bank currently has 72 branches in 16 countries and recently opened a branch in the Cambodian capital of Phnom Penh. The bank is considering opening two more branches in Brazil and Australia.

“One of my priorities will be enhancing the functions of current branches overseas,” Cho said.

As for the delayed acquisition of Bank Metro Express, a leading Indonesian financial institution, Cho expressed his determination to see the deal through.

The bank signed a contract to purchase a 40 percent stake in the bank in 2012, but the deal has not yet been approved by the Indonesian financial authority.

“It is an important long-term project that the bank wanted,” he said. “It has been late due to the differences in regulations between Korea and Indonesia, but we will not give up.”