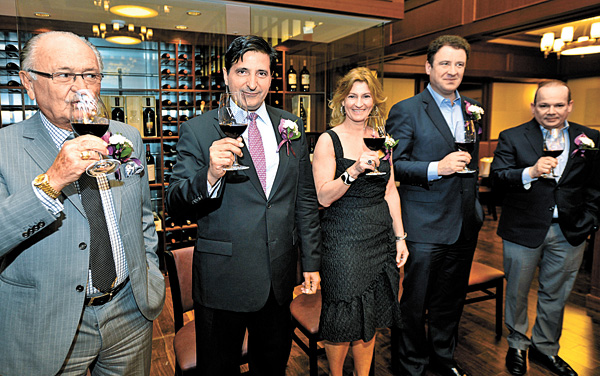 To celebrate the opening, founder and owner Wolfgang Zwiener visited Seoul on Wednesday. His son Peter Zwiener, who is a managing partner of Wolfgang’s Steakhouse, and key staff from the restaurant chain’s headquarters accompanied him.

The young Zwiener emphasized that the new establishment will serve fine beef using the same aging process as its other restaurants.

“All of the prime beef is dry aged in-house for 28 days in the restaurant’s on-site meat locker to ensure that we serve tender and quality meat,” said Peter Zwiener.

Korea is the second Asian country to open a branch of the upscale steakhouse after Japan.

Established in 2004, the restaurant has a total of 11 locations including New York, Miami, Beverly Hills, Calif., and Waikiki, Hawaii.

Wolfgang Zwiener worked for the famous Peter Luger Steakhouse in Brooklyn for more than 40 years and used the experience to open his own restaurant in the city.

The two-story Seoul Wolfgang’s Steakhouse can accommodate 200 people. The upper floor consists of private rooms of various sizes for between six and 20 people.