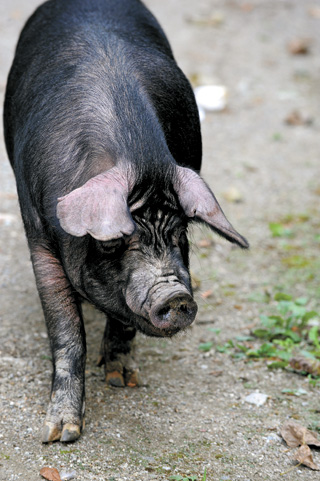 Jeju black pigs were designated as state treasures earlier this week. But as only those at a research farm have been honored as Natural Monuments, people can still enjoy the popular local dish. [JoongAng Ilbo]

The Jeju black pig, one of the main culinary attractions of Korea’s scenic island off its southern coast, is more than just a delicacy.

The breed indigenous to Jeju boasts a long history. It appeared in third-century Chinese historical records, and continued to be mentioned throughout domestic documents until the latter part of Korea’s Joseon Dynasty (1392-1910).

In recognition of the hog and its history, the Cultural Heritage Administration announced on Tuesday that the 260 Jeju black pigs registered to the autonomous region’s Animal Husbandry Promotion Center have been collectively classified as a state-designated treasure.

They are now Korea’s Natural Monument No. 550, the status given to animals, plants or geological features of historic, cultural or academic value, among others.

“Due to Jeju’s geographic feature, which isolates it from the mainland, Jeju black pigs have developed their own characteristics,” said Lee Jae-sun from the administration’s natural monument division.

The breed’s DNA makeup is clearly different from the black pigs in the rest of Korea, experts say, adding that they are even distinguishable on their outside.

The ears of Jeju black pigs are smaller than those of their counterparts on the mainland and stick upward instead of forward.

Experts also say that Jeju pigs, which have adjusted well to the island’s capricious weather and harsh climate, are physically stronger and are more resistant to diseases than Korea’s other pigs.

The CHA also considers the black pigs as having a distinct place in Jeju’s unique history and culture.

The island’s inhabitants raised the animals near toilets and used human excrement and food waste as manure.

The breed was also always presented during important occasions like weddings or funerals.

Additionally, the meat of the black pig is used extremely diversely and creatively on the island, including as sundae (blood sausage).

However, the animal has had its dark days.

It was near extinction during the Japanese colonization (1910-45), as pigs from outside the region mated with Jeju black pigs, leading the number of pure breeds to decline significantly during the period.

Only in 1986 did Jeju’s Animal Husbandry Promotion Center manage to obtain five pedigree Jeju black pigs to increase their number through breeding.

For Jeju’s people, the designation is therefore a result of 30 years of effort.

“The CHA and the Animal Husbandry Promotion Center will work together to come up with specific guidelines on raising the Jeju black pigs so that we can preserve the breed more stably,” said Lee.

When the CHA said in January that it planned to designate the animal as a state treasure, some people wondered if that meant they wouldn’t be able to enjoy it as a local delicacy anymore.

But as only the 260 pigs at the center have been bestowed with the honor, the breed’s beloved meat can still be eaten.

Jeju now has three of its indigenous animals listed as natural monuments: Its horses, black cows and black pigs.