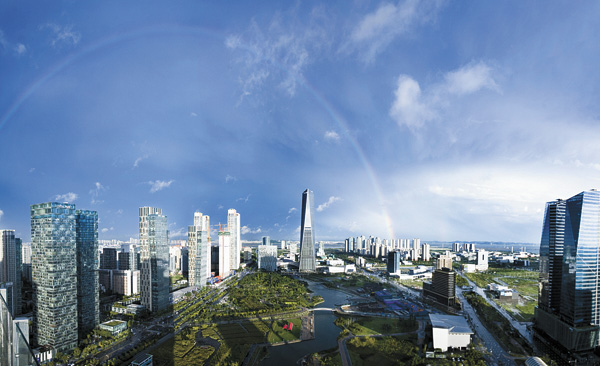 Last year, authorities at the international business hub emphasized the need for the IFEZ to become a deregulation test bed for Korea. They continue to call for less stringent policies without much progress. Especially since free trade zones in Japan and China are becoming experimental districts for less regulation and more differentiation, change seems to be essential. Many worry that without adequate modifications of the law, the IFEZ will fall behind in the race with other free economic zones.

In Japan, Tokyo, Osaka and Aichi Prefecture are the three strategic zones where foreign investment is concentrated. The Abe administration is pushing for three specific changes in managing these districts. First, bolder moves are to be taken toward amending taxation and financial policies. Second, the three zones should be a top priority in implementing changes. Finally, the prime minister will seek to lessen conflicting interests between the central government and other involved stakeholders by installing a unified headquarters. Through this, the minister of the free economic zone, municipal head and private investors will be able to communicate with less turbulence.

As for China, changes are multifaceted. The original free trade district in Shanghai was expanded over four times its original area as of March 1. On the other hand, new free trade zones are to be installed in Tianjin, Guangdong and Fujian.

These changes imply China’s attempt to move into a new phase of opening its shores to foreign investment by securing new free trade zones all across the country. Especially in reflection of the trials and errors in Shanghai, the Chinese government will strike out some items on their negative list that previously restricted businesses from investing in certain projects or products.

In addition, support for business in the service and advanced manufacturing sectors has increased. For example, the many restrictions on shares and management are to be lifted. Customs clearance will also be less difficult, while shipping services will become more accessible.

The IFEZ authorities worry that their economic zone is not developing as quickly as those in Japan or China. “Our proposal for partial amendments in free trade zone special laws is still pending,” said an IFEZ official. “In order to stay competitive alongside neighboring countries, social consensus regarding deregulation is a must, and cooperative discussions should take place. Overall, support and determination on a national level need to be the basis for growth.”