Rookies come together for first time in LPGA

Rookies come together for first time in LPGA 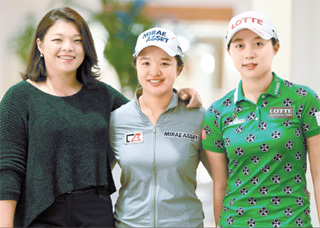 The top Korean LPGA Tour rookies will all play in the JTBC Founders Cup. From left: Jang Ha-na, Kim Sei-young and Kim Hyo-joo. Provided by the LPGA

It will be the first LPGA event held in the United States since January and will be held at the Wildfire Golf Club at the JW Marriott Phoenix Desert Ridge Resort & Spa in Phoenix, Arizona, with a total purse of $1.5 million. The winner will collect $225,000.

It is also the first LPGA event of the season sponsored by a Korean company. JTBC, a broadcasting channel and affiliate of the Korea JoongAng Daily, is sponsoring this event for the second year in a row. After this tournament, the Kia Classic opens next week followed by the Lotte Championship next month and the KEB-Hana Bank Championship, to be held in October.

With the season’s first major tournament, ANA Inspiration, opening two weeks later, many golfers are expected to use the event to fine-tune their condition. But the JTBC Founders Cup is also considered an event to celebrate LPGA rookies’ admission to the tour.

Sports pundits have been saying that this season’s Korean LPGA rookies are stronger than ever. In last year’s world ranking, nine of them were in the top 100. It is difficult for non-LPGA members to make it into the top 100 and then make their tour debut. Korea’s Shin Ji-yae and Japan’s Ai Miyazato could be an exception.

This season, Korean rookies are on the top of the table. World No. 8 Kim Hyo-joo, Baek Kyu-jung (12th), Jang Ha-na (21st) and Kim Sei-young (22nd), who collected her first victory at the Pure Silk-Bahamas LPGA Classic in February, are eye-catching Korean golfers making their LPGA debut.

In particular, Kim Hyo-joo, who won the Evian Championship LPGA major tournament last year after an invitation, is playing in her first LPGA event in the United States after joining the tour. Kim will tee off with compatriots Park Hee-young and Lee Mi-hyang.

“I warmed up in events in Asia, but this is the real start,” she said.

The Founders Cup is the also the first time that all of the best Korean rookies will compete on the same stage. They will join top rookies from other countries such as Ariya Jutanugarn of Thailand, Lee Min-ji of Australia, Korean-American Allison Lee and Japanese veteran Yokomine Sakura.

Chun In-gee, who is not an LPGA member but will play on an invitation, is looking to leave her name on the top of the leaderboard. The 20-year-old, who competed against Kim, Baek and Jang in Korea last year, will also appear in two more LPGA Tours after the JTBC Founders Cup.

Chun, who is ranked 23rd in the world, previously participated in LPGA events in Asia, but this is first time she will play in the United States.

“I think it will be a good chance for her to join the LPGA Tour right away if she wins one of the three events that she participates in,” said Park Won, a commentator for JTBC Golf. “Since her friends who competed with her have all moved on to the LPGA, she will have a big desire to prove herself in the LPGA Tour.”

Korean golfers have dominated this season, winning four of five events so far. Besides the Korean rookies, Choi Na-yeon, who won the season opener Coates Golf Championship, and Amy Yang, who won the Honda LPGA Thailand in February, will also compete in the event.

However, world No. 2 Park In-bee, who won the HSBC Women’s Champions earlier this month with a wire-to-wire, bogey-free victory, will not participate in the event and No. 6 Ryu So-yeon is also sitting out.

A Korean golfer has not won the JTBC Founders Cup in the past four years.

World No. 1 and current prize money leader Lydia Ko has been picked as the top contender again.

The 17-year-old Korea-born New Zealander has finished in the top 7 in all four events she has played this season, including a victory at the ISPS Handa Women’s Australian Open last month. She will play with Choi Na-yeon and Michelle Wie in the first round.

JTBC Golf will broadcast the event live. The first round will be broadcast at 7 a.m. on Friday, followed by 6:45 a.m. on Saturday and 7:45 a.m. on Sunday and Monday.