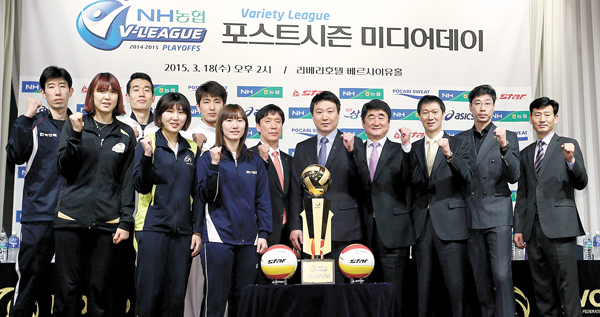 Coaches and team captains pose with the V-League championship trophy during playoff media day Wednesday at the Hotel Rivera in Seoul. [NEWSIS]

After a five-month regular season, the Korea Professional Volleyball League (V-League) postseason is set to get under way.

In the men’s division, the best-of-three playoff series starts on Saturday between Ansan OK Savings Bank Rush&Cash and Suwon Kepco Vixtorm at Sangnoksu Gymnasium in Ansan, Gyeonggi. The winner will play the regular season champion Daejeon Samsung Fire Bluefangs in a best-of-five championship series from March 28.

In the women’s division, Hwaseong IBK Altos meets Suwon Hyundai E&C Hillstate tonight at Hwaseong Indoor Arena in Geyonggi in their best-of-three series. The winner will vie for the championship trophy against Seongnam Korea Express Corporation Hi-pass from March 27.

After the Cheonan Hyundai Capital Skywalkers failed to make the playoffs for the first time in its history and Incheon Korean Air Jumbos, which haven’t missed the playoffs for eight years, also missing, this season’s men’s V-League playoff is anything by typical.

Both Rush&Cash and Vixtorm will appear in the playoffs for the first time. Rush&Cash, which finished second in the regular season, was founded last year, while Vixtorm, the league’s oldest volleyball club founded in 1945, has been in the postseason just once in a 2011/12 season “semi-playoff” against the Skywalkers.

In the V-League, if the point difference between the No. 3 and No. 4 team in the regular season is three or fewer, the two teams play a “semi-playoff” to determine who will advance.

“It’s a little bit awkward that the people I usually face have changed,” said Bluefangs coach Shin Chi-yong at the V-League playoffs media event Wednesday. “But I’m happy I will be playing in the finals with coaches who have a spent long time with me.”

Both Rush&Cash coach Kim Se-jin and Vixtorm coach Shin Young-chul played under Shin Chi-yong on the Bluefangs and national team. This is the first time in V-League playoff history that all the teams’ coaches are Bluefangs alumni.

“Both are coaches I respect and who helped my volleyball career,” said Kim.

The Bluefangs coach is looking for his team’s eighth straight championship and ninth overall.

“If I had to lose, it would be better to lose against people I spent a long time with,” he said. “So I’m a little comfortable this postseason because I can go out with a smile if I lose.”

However, Shin made it clear he was not ready to give up the trophy, joking that the challengers should be satisfied reaching the playoffs for the first time.

“My daughter is getting married in April, and I’d like to win the championship and then attend the wedding,” he said. “I hope both coaches consider my situation.”

But for Kim and Vixtorm’s Shin, their first task is reaching the championship series.

“Shin Chi-yong is not my opponent,” said Kim. “First we have to overcome Kepco.”

In the regular season, Rush&Cash was 4-2 against Vixtorm. The team is led by right attacker Robertlandy Simon, who is the league’s second-leading scorer and blocker, and best server. The Cuban is joined by the young trio of Song Myung-geun, Song Hui-chae and Lee Min-gyu.

The Bluefangs’ Shin declined to comment on which team he thinks will be his opponent. In the regular season, the Bluefangs were 4-2 against each semifinalist.

“Kim is leading the team well with his charisma, while Shin is a man who has wide knowledge of volleyball,” he said. “Each of the three teams has an equal chance of winning.”

In the women’s division, all three teams are hungry to win. Hi-pass, which claimed the regular season title for the first time in 10 years, is the only team in the league that has never hoisted the championship trophy.

Regular season runner-up Altos wants to wash away painful memories of last season, when the team was the season champion and went directly to the championship series, only to lose to GS Caltex Seoul Kixx.

Hillstate is looking for its second trophy since the 2010/11 season. The team last season finished fifth and is looking for a fresh start under new coach Yang Chul-ho.

In head-to-head competition, Hillstate had four wins and two draws against Altos.

Destinee Hooker of the Altos is now healthy and will be supported by Kim Hee-jin and Park Jeong-ah. The team won its last six matches.

“Destinee’s injury was our critical moment, but it worked as a turning point,” said Altos coach Lee Jung-chul. “Park and Kim have grown and now our team is stabilized.”

“Hi-pass lost only once against Hillstate during the regular season and was 2-4 against the Altos.