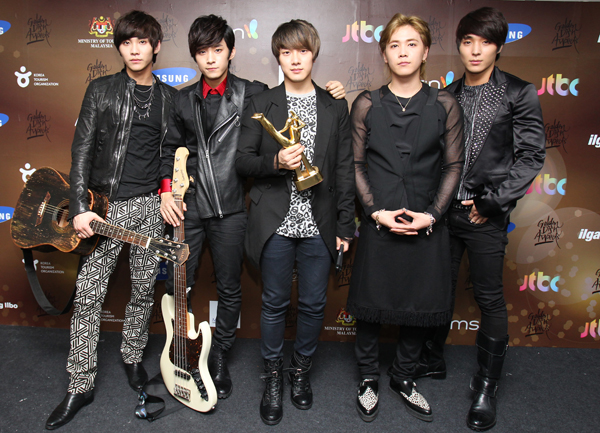 K-pop acts CNBlue, FTIsland, pictured above, AOA and Juniel will hold a joint concert on May 2 and 3.

According to FNC Entertainment, the musicians’ agency, a “family concert” will be held featuring all of its acts.

The concert will be titled “2015 FNC Kingdom in Seoul.”

The nation’s three major entertainment agencies, SM, YG and JYP, have held such concerts in the past, but it is the first time for FNC Entertainment to follow in their footsteps.

“It will be a concert in which you can enjoy various genres of music,” the agency said Wednesday. “You will see powerful performances by FTIsland and CNBlue while girl group AOA will perform their flamboyant dancing. Singer-songwriter Juniel will entertain the audience with her acoustic music.”

Through the concert, FNC will also unveil its new group N. Flying, which has not yet debuted. The agency added that there will be special collaborations.

FNC Entertainment will also try its hand at producing a teen drama series this year.

“School” is a long-running KBS teen drama series. The first season aired in 1999 and produced many stars such as Bae Doo-na of Hollywood film “Jupiter Ascending” (2015) and Jang Hyuk of “Shine or Go Crazy.” Since then, the drama series has been airing on and off.