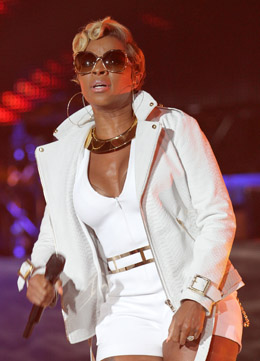 Mary J. Blige is seen performing at the 2014 Essence Music Festival Concert - Day 3 at Superdome in this file photo from July 5, 2014. [AP/NEWSIS]

AUSTIN, Texas - Mary J. Blige performed for a feverish crowd Tuesday night at the Samsung Supper Club in an event not sponsored by South by Southwest, another sign of unofficial concerts rivaling the festival when it comes to pulling big-name acts.

Blige is no dancer, but the performer moved energetically at the show, even imitating Michael Jackson’s dance moves during her funky hit, “Just Fine.’’

She kicked off her set with “Enough Cryin’’’ - which features her rapping as her alter ego Brook-Lynn - and she continued with the up-tempo anthem, “The One.’’

She moved like a pro, though there was water dripping from the covered ceiling on the venue’s rooftop. She managed to maneuver in heels and an ab-revealing crop top.

“Go Mary. Go Mary,’’ the crowd, who attended a seated dinner prior to the performance, yelled loudly. Blige’s husband, Kendu Isaacs, filmed her performance with his phone while “Orange Is the New Black’’ actress Danielle Brooks, music manager Kevin Liles and track and field Olympian Sanya Richards-Ross - along with her pro football player husband Aaron Ross - sang and danced along.

“Where the ‘My Life’ fans at?’’ the 44-year-old Blige asked, referring to her classic 1994 sophomore album. She followed with songs from that album, including “Be Happy’’ and “You Bring Me Joy.’’

Before singing her latest song, “Doubt,’’ Blige offered her usual words of encouragement.

“Where are all those amazingly strong, good women that nobody can’t keep down out there? ... I mean, make some noise!’’ she said. “The voice of doubt is going to be conquered by you all the time.’’

Blige asked the audience to stand up for her rendition of U2’s “One,’’ which she covered a decade ago, and they danced happily when she closed with her pop hit, “Family Affair.’’

D’Angelo and Nick Jonas are some of the other top acts at events unrelated to the festival.