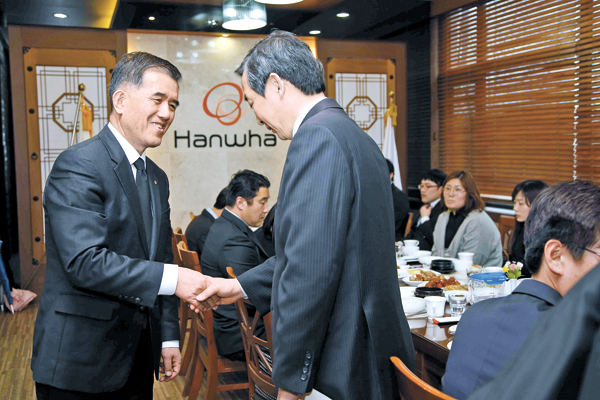 Shim Kyung-seob, CEO and president of Hanwha, left, offers condolences to a relatives of the victims of the Cheonan sinking at the Daejeon office of Hanwha Group on Wednesday. [NEWSIS]

Hanwha Group held a commemoration ceremony to mark the fifth anniversary of the sinking of the Cheonan warship on Wednesday at Daejeon National Cemetery where the 46 soldiers who were killed are buried.

A letter from Chairman Kim Seung-youn was read by Shim Kyung-seob, CEO and president of Hanwha Corporation.

“I’d like to offer condolences on behalf of Hanwha Group members,” he read. “Hanwha is a company that has its roots in the defense industry. Therefore, I believe that the company has a special connection [with the incident and the bereaved families].”

The military contractor decided to hire family members of the deceased sailors at the request of the chairman, who said at the time, “We should ponder what we can do for the bereaved families.”

The South Korean Navy patrol boat Cheonan sank near the inter-Korean border in the Yellow Sea on March 26, 2010.

Hanwha Corporation’s gunpowder division and affiliates hired the wives, children or siblings of the men lost in the disaster.