Lufthansa’s new travel class is certainly comfortable, but not cheap

Lufthansa’s new travel class is certainly comfortable, but not cheap 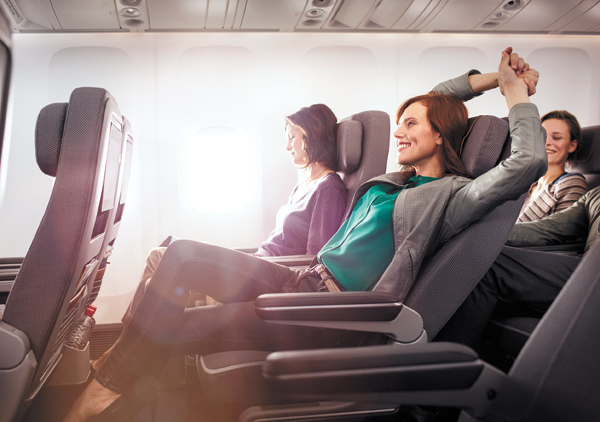 After a grueling 10-hour flight from Incheon to Frankfurt on March 9 in Premium Economy class, one thought crossed my mind: “I will not fly economy class from now on for any flight longer than 10 hours.”

Just like a majority of people in their late 20s, my previous flight experiences all involved being stuck in a tiny economy seat no matter how long the flight, which could easily exceed 12 hours to Europe or the United States from Seoul. The reason many people choose to fly economy is obvious: Costs can soar as much as three times for business class.

The high cost leaves fliers little choice but to opt for economy, especially if the fee is not paid for by their employer or they are in their 20s or 30s and earning an average income like me.

But now, travelers have one more choice if they are flying from Seoul on Frankfurt-based air carrier Lufthansa. The company has retrofitted the aircraft used on its five weekly flights linking Frankfurt and Seoul and five from Munich to Seoul to include 28 to 32 Premium Economy class seats per jet. 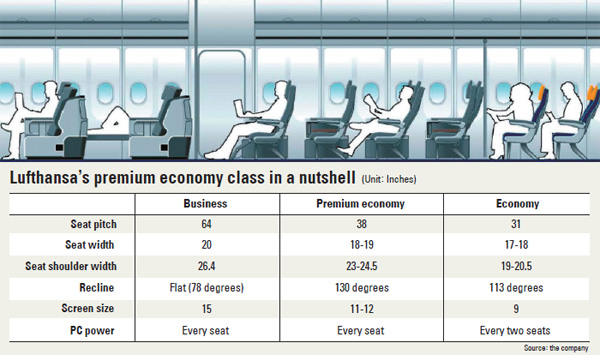 Germany’s biggest airline introduced the mid-range class in November, investing over 100 million euros ($107 million) in the project, excluding marketing costs, to transform each of its wide-bodied aircraft for long flights.

On a press tour organized by Lufthansa, I had a chance to experience the new section firsthand on March 9 on a flight to Frankfurt from Incheon that the company said would give passengers extra space and comfort at a reasonable price.

The first big difference you will notice stepping into premium economy class is its 2-4-2 configuration instead of the 3-4-3 organization used in economy. By getting rid of a seat on each side, travelers in premium economy can enjoy extra space for width and a greater recline. Lufthansa says the seats provide one-and-and-a-half times as much room as an economy class seat.

The width of a seat in Premium Economy class ranges from 18 to 19 inches compared to 17-18 inches in economy. The seats’ shoulder width ranges from 23 to 24.5 inches, about four inches wider than economy class, which is between 19 and 20.5 inches.

Another benefit is that premium economy seats can recline to 130 degrees, 17 degrees more than the 113 degree recline provided in economy. Meal and drink offerings are the same as economy but they are served in porcelain tableware and glasses instead of plastic trays and cups. Premium economy passengers can also check in two pieces of luggage of up to 23 kilograms (51 pounds) each, compared with just one in economy class.

Also, the touch screen attached to the back of each seat is 11 to 12 inches, three inches larger than economy class. Every premium economy seat is equipped with a power outlet, compared with one for every two economy class seats. Lufthansa also provides Wi-Fi during flights, except in Chinese airspace. The airliner charges nine euros for one-hour online service,14 euros for four hours and 17 euros for full flights(up to 24 hours).

Putting aside all the numbers, it was easy to see the differences between the two, and premium economy surely provided me an extra sense of comfort that would have been absent in economy, though it is hard to describe point by point in words.

While I could tell there was definitely more room, I felt like it would be hard to convince passengers that premium economy provides 50 percent more space than an economy seat because all the comfort I felt was subtle rather than substantial. For instance, reclining your seat did not appear to be that much different from economy, though the company says it falls 17 degrees further.

It was also clear that Lufthansa wanted to connect the improved economy class with regular economy rather than business, and is targeting people who usually travel on economy to induce them to upgrade for the newly launched seat, not the other way around.

“Premium Economy is for everyone who says economy class is not good enough or comfortable enough for me, but who [also] says they can’t afford or are not allowed to fly business class because of the travel policies [at their companies],” said Annette Mann, director of Lufthansa’s premium economy launch team during a presentation for reporters from Korea, China, Japan, India and Australia, at the carrier’s headquarters in Frankfurt. She added that the new seats aren’t intended to draw customers away from business class, an important source of revenue, but to encourage economy-class customers to pay more for the seats or upgrade using mileage points.

While Lufthansa has been aggressively promoting its new in-between class since its launch in November, other global airlines have been running a similar class since for up to 20 years.

Virgin Atlantic prides itself on being the first to introduce the premium economy class in 1992, and since then it has been imitated by other globe-trotting air carriers including British Airways, Air France, Japan Airlines and so on. While most airlines offer a seat pitch - the distance between the back of one seat and the same point on the seat behind it - of 36 to 38 inches, including Lufthansa, a premium economy ticket on Turkish Airlines gets you a whopping 48 inches of seat pitch.

Although a growing number of airlines are jumping on the mid-range bandwagon, Korea’s top two carriers, Korean Air and Asiana Airlines, have not. However, an economy class seat on either airline has a pitch of 34 inches compared to 31 to 32 inches usually offered by other companies. Lufthansa’s economy class seat pitch is 31 inches, which doubles to 64 inches for a business class seat.

With the space measurements in mind, the most important factor is still price. Base fares can vary depending on promotions and when the booking is made but Lufthansa said it will charge about 300 euros for premium economy on a one-way flight from Korea to Germany. This compares with about 500 euro more for a flight purchased a month in advance than premium economy for a roundtrip seat in business class, according to Lufthansa’s website.

Passengers who wish to upgrade to premium economy on the spot can simply pay with cash or credit cards if there are vacancies.

So the decision comes down to whether you are willing to spend 600 euros for a little extra comfort on a round-trip 11 hour haul.

Kim Hee-jin, who has been a flight attendant at Lufthansa for eight years, said Korean travelers have reacted positively to the improved seating.

“I think I would make the same calculation and upgrade to premium economy if I were a passenger by paying the additional 300 euros,” Kim said, adding that usually all of the premium seats on Lufthansa’s Korea-Germany flights are booked.

In the tourism industry, Koreans are known for their pragmatic spending. While on a trip, Koreans usually prefer to save money by flying economy so they can use the extra cash to buy luxury goods. But it seems that paying 600 euros more for extra comfort on a long round trip flight is within budget and fits Korean tastes.

If the decision comes down to me, I may have to take back the first thought that crossed my mind after my flight to Frankfurt earlier this month. During my six-day stay in Germany, I found I could buy a Hugo Boss suit for less than 300 euros at the Ingolstadt Village Outlet in Munich, which came as a surprise to me because it would be much more expensive in Seoul.

If I were paying on my own, I would be more likely to pay 300 euros only for the return flight. On the flight out of Seoul, I would save 300 euros, forsaking the extra comforts of premium economy to spend on something for myself, maybe that Hugo Boss suit or a Montblanc wallet.

But if I were on a business trip and my company paid for the flight, I would seek every possible way to get approval to fly premium economy, including assuring my boss that the 600 euro upgrade would improve my work efficiency.