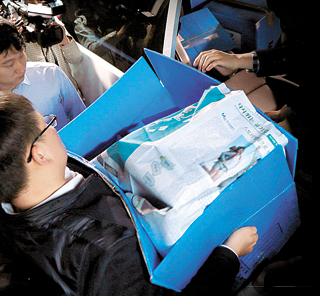 In the week since Prime Minister Lee Wan-koo declared a war on corruption in business circles, prosecutors have launched an investigation into Posco Engineering and Construction (E&C) for alleged slush funds overseas and companies that made investments in line with the Lee Myung-bak administration’s resource diplomacy push.

Worries are spreading quickly among major companies that they may be next, which is all they need in a stuck-in-the rut economy with falling oil prices, a weak yen and the threat of deflation.

A day after the Seoul Central District Prosecutors’ Office raided Keangnam Enterprises and Korea National Oil Corporation (KNOC) on Wednesday for alleged shady resources investments overseas, some Internet based media outlets reported that the prosecution is tracking Lotte Shopping’s capital flow after it received a report from the Financial Intelligence Unit (FIU) saying the company might have attempted to create slush funds by transferring money within Lotte Group’s affiliates.

The prosecution later confirmed, “A team from the Seoul Central Prosecutors’ Office ran an investigation, but found no clear evidence of a crime. We don’t have any further plans for Lotte for now.”

There also were reports that the Seoul Central Prosecutors’ Office is tracing bank accounts of the family that owns Shinsegae Group, including vice chairman Chung Yong-jin because they are suspected of creating slush funds by using checks issued from a corporate account.

Shinsegae said the issue was already brought up in January and the company has explained it. It said the prosecution hasn’t requested it to submit any additional documents for further investigation.

Industry insiders say it is reasonable to punish irregularities, but the rumors about Lotte and Shinsegae suggest a new campaign by the prosecution against big Korean companies.

There also are opinions in legal circles that the prosecution may be targeting companies with links to the Lee Myung-bak administration.

One common point for Posco E&C, Keangnam and KNOC is the companies were led by men who had ties with key aides of former President Lee or were involved in initiatives by the former administration, such as resources diplomacy, an attempt to secure natural resources for Korea through large investments overseas. Many of the investments are now considered to have been expensive duds that cost the nation as a whole, but benefited certain individuals and companies.

Sung Wan-jong, chairman of Keangnam, was a member of the former president’s transition committee in 2008. President Park Geun-hye and former President Lee were members of what then was known as the Grand National Party, but political rivals within it.

“They are just running investigations once they find evidence of a crime,” he said.

But the companies in the hot seat see the situation differently.

“The prosecution obviously targeted Keangnam because the company’s chairman is close to Lee [Myung-bak],” said an official of Keangnam who requested anonymity. “Resources diplomacy was a business operated since the Roh Moo-hyun administration.”

Keangnam Chairman Sung declared Thursday he would relinquish management rights by giving his 9.5 percent stake in the company to creditors, including Shinhan Bank. The company requested that creditors come up with an additional 100 billion won ($89.4 million) to stabilize the financially struggling company. Creditors will make a decision today.

The investigated companies are having a hard time. Posco, for instance, is dealing with hundreds of phone calls from foreign investors inquiring about the prosecution’s investigation of Posco E&C.

“A bigger problem is that so many companies are currently considered subject to investigation,” said an analyst. “Once the name of a company is reported by the media, the credit standing for the company will be affected.”

“Companies can’t do anything when caught in such rumors,” said Jeon Sam-hyun, a law studies professor at Soongsil University. “There must be rules for the prosecution in such a big case. In order to find crimes, they need to clearly state what the suspicion is. They shouldn’t abuse their power.”