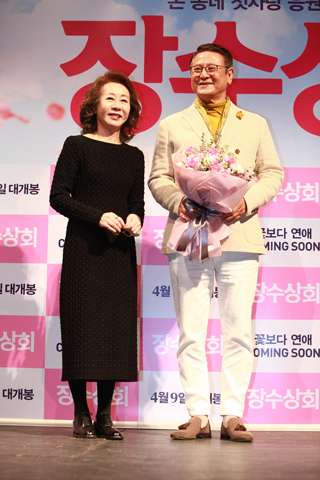 Nearly half a century has passed since veteran actors Park Keun-hyong and Youn Yuh-jung worked together for the first time on MBC drama “Jang Hee Bin” in 1971.

“We are working with each other for the first time in nearly 45 years,” said Youn during a press conference on March 12 at the Apgujeong CGV in southern Seoul.

“Back then, Park used to coach me a lot about how I should act, but I told him not to do that now,” said the 68-year-old actress, joyfully discussing what it was like to work with Park again. “I acted the way I wanted to.”

In “Salute D’Amour,” directed by Kang of “Tae Guk Gi: Brotherhood of War” (2004), Park plays Seong-chil, a bullheaded man in his 70s who doesn’t know his way around women.

However, he strives to win the heart of Geum-nim, a flower shop owner played by Youn.

Their interactions may be awkward while they are getting to know one another, but this genuineness is supposed to strike at people’s hearts.

“I had a thirst to make a movie that my father and I could watch together,” explained Kang when asked about picking such an unlikely genre for a director more familiar with war movies.

“I had a fluttering feeling when I first read the script. I can still remember it now and want to deliver the same pleasure to the audience,” he added.

Although the film revolves around the love between two elderly people, actor Park said the shooting process made him feel younger.

“This film made me reminisce about my school days when I used to admire a girl I didn’t know. I used to have butterflies in my stomach by just looking at her silhouette,” the 74-year-old said.

It also came down to director Kang’s ability to make the actors feel comfortable.

“Fifty years ago when I was acting on stage, actors got together to discuss and brainstorm the play and built an acting plan,” Park explained.

“For the first time in 50 years I could afford to do that again, thanks to Kang. He was fully prepared to minimize the unnecessary takes on the set.”

“Since exploding bombs cost a fortune, which is what Kang is used to in his previous movies, he was really fully prepared on the set,” she said.

“Sometimes, my schedule finished earlier than expected so I was kind of lost on the set, not knowing what to do in my extra time.”

Cho Jin-woong, Han Ji-min and Chan-yeol from K-pop group Exo took on roles as the sidekicks who help the senior protagonists get together.

They all agreed that working with Youn and Park was an “honorable experience.”

“Going to the set itself was like studying for me,” said Han.

“Talking with Park in my idle time and acting in front of Youn are all of something that I have always dreamed of.”

“Salute D’Amour” is slated to open next month.