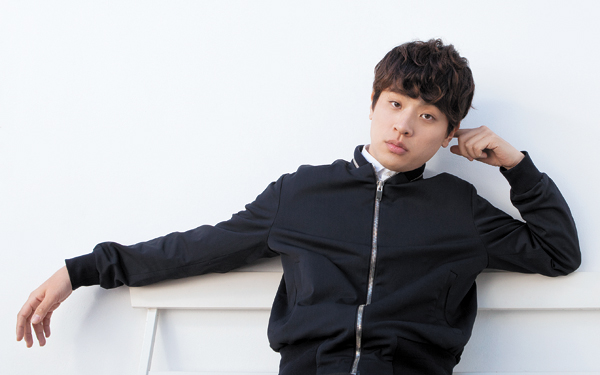 Actor Park Jung-min, 28, stands out in Kim Tai-sik’s latest movie, “Heartbreak Hotel,” which opened in local theaters on Thursday. The up-and-coming actor says he avoids having role models because it circumscribes his potential. By Park Sang-moon

Park Jung-min is not the most famous actor in Korea, but he’s shown his talent in acclaimed indie flicks such as “Bleak Night” (2011) and “Tinker Ticker” (2014).

And while he may still have some time before he reaches the top, the 28-year-old blows the audience away again in upcoming film “Heartbreak Hotel,” directed by Kim Tai-sik.

In the movie he takes on the role of Chen, an illegal immigrant living in the United States who joins a local gang to earn money.

Amid the grim portrayal of the doomed love between the two protagonists, played by Kang Ji-hwan and Yoon Jin-seo, Park’s character adds zest to the plot, flitting between being humorous and heart-wrenching. 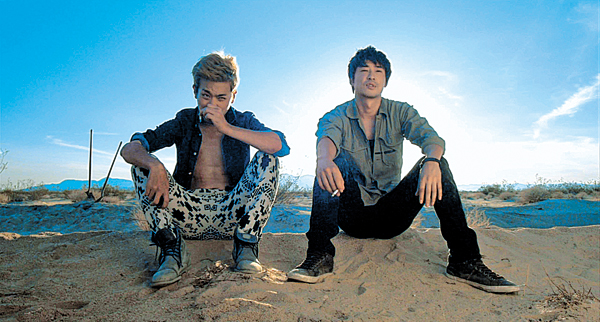 Park plays Chen, left, a loyal friend to John (Kang Ji-hwan) who wants start fresh with the woman he loves. Provided by the distributor

“I want to be an actor who keeps the viewers curious,” said Park in an interview with the Korea JoongAng Daily last Friday.

“For example, when I hear that [popular actor Hwang] Jung-min has filmed another movie, I can’t wait to go to the theater and watch it. I want to be that kind of actor.”

After Park debuted in 2011 with “Bleak Night,” Hwang kept his eye on him and recruited him to his agency, Sem Company.

Park said he had dreamed of being an actor since he was in middle school, but it took him a little more time to figure out if it was what he really wanted.

In the meantime, he attended Korea University, one of the nation’s most prestigious private universities.

“I was a good student, which is why I couldn’t bluntly say in front of my parents that I wanted to be an actor all of a sudden,” he said.

“When I was more certain of my dream and had the ability to achieve it, I decided to enroll into Korea National University of Arts [K-Arts] to study acting.”

His fellow alumni include some of the latest breakout stars such as Byun Yo-han and Lee Je-hoon. By chance, Park worked with both of them on movies.

However, while Park debuted first, it was Byun and Lee who rose to stardom.

“I knew that Byun would become a star before me because he has such great talents in acting, facial expression, dancing and many more. Studying was pretty much the only thing that I outdid him in. I am not jealous or under any pressure about it. It is just that I wished I would become more popular so that my parents can go anywhere and be proud of me.”

Although Park hasn’t hit the jackpot yet, he doesn’t want to become anxious and be hasty about choosing his work.

“I want to be a responsible actor who can recommend my movies to my close acquaintances,” he said.

“In the beginning, I used to take on all scripts [I was offered]. That attitude is still necessary for me but now I want to be more responsible about the roles I do. It means that if there are any scenarios that I think I can do well, I should snatch it even if it means that I have to take an audition for it.”

The actor said he was just overwhelmed at the fact that he could go to the United States, a country that he has never been to, for “Heartbreak Hotel.”

The entire film was shot in the U.S., including Los Angeles and Las Vegas. But it wasn’t as easy as he expected.

“Although the other actors and crew took care of each other, going through a strict schedule in a foreign land came down hard on me.”

When asked about a fierce scene in which he and his close friend John have a standoff near the end of the film, which is one of the most tense moments, Park said this was “when Chen and I came to a point of contact.”

“When I filmed that scene, my mental and physical stress had reached its peak. When I was yelling at Kang [in the film], I was doing the same thing inside of my head, because I thought I couldn’t bear any longer.”

The actor’s future is currently becoming a public curiosity as a result.

“I want to deliver a genuine story about real people,” he said. “I’m breathing life into the words and I don’t want to fake it.”

Park will play Yoon’s closest acquaintance who expresses his nationalism more through actions rather than words.