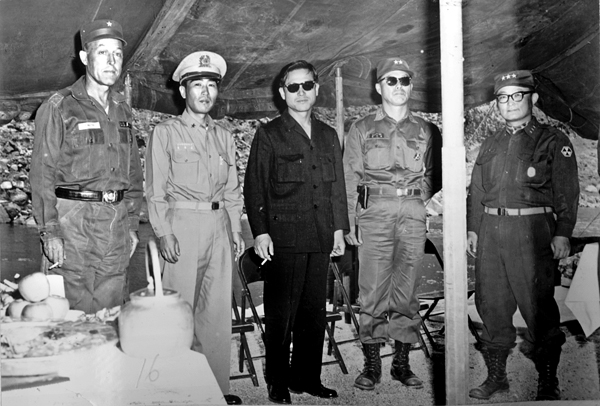 Kim Jong-pil, third from left, poses for a picture during his visit to the Army’s Sixth Corps Headquarters in Pocheon, Gyeonggi, in April 1962. It was an artillery unit from the Sixth Corps that first seized Army Headquarters in the early hours of the May 16 military coup in 1961. Gen. Kim Gye-won, far right, later became the last chief of staff for President Park Chung Hee, who was assassinated by his longtime aid Kim Jae-gyu in 1979, 18 years after the coup.Provided by Kim Jong-pil

This is the eighth in a series of articles on the life and times of Kim Jong-pil, a two-time prime minister, based on extensive interviews with the 89-year-old. This installment chronicles the run-up to the fateful May 16 military coup in which Park Chung Hee mobilized 3,600 military men to take control of the country, a risky bet considering the military was 600,000-men strong at the time. Kim recalls the former strongman saying that once Seoul fell, armed forces outside of Seoul would not resist. Kim says the military leadership was paralyzed by a sense of complacency only 11 years after it was overrun by the North Korean army in 1950.

History is not to be read but to be written. And the future does not just come along. We humans have to make it happen.

In early 1961, those who put their lives on the line for a revolution were determined to make history themselves. In the run-up to the May 16 revolution, we had to change our plans twice at the last minute. Finally we were in a situation in which we could not alter our plan anymore. We sought help from God. I myself whispered, “May God bless us,” in English many times a day.

Some say it was a miracle that we took control of the country with only 3,600 military men pitted against a 600,000-strong Army on top of 56,000 U.S. armed forces soldiers stationed in the country. It may have been a miracle. We did not encounter much resistance on our way toward Seoul in the early hours of May 16. More surprisingly, our plan was leaked not only once but several times. 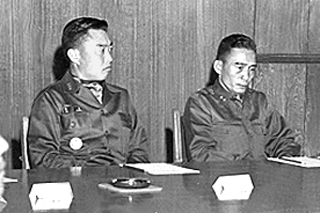 Park Chung Hee, right, then-vice chairman of the Supreme Council for National Reconstruction, sits next to then-Chairman Chang Do-young during meeting on May 20, 1961, four days after Park pulled off his coup. [JoongAng Photo]

Looking back, I think if something is meant to be realized, it will be under any circumstance.

Our last meeting before the revolution was held on May 14 at my brother’s house in Seoul.

My brother Kim Jong-rak dedicated himself to the revolution, putting his safety in danger. A total of 25 men gathered for the last meeting at his house that Sunday.

At the meeting, Park Chung Hee declared May 16 as D-day and set the hour of action at 3 a.m.

The room was filled with tension when he said there would be “no more changes to the plan no matter what,” mindful of our two previous thwarted starts.

“The last man standing alive must fight to the end to achieve our revolution,” he said.

Our plan centered on mobilizing 3,500 troops and moving them all to Seoul, which sparked concerns among some that troops outside of Seoul would be left untouched and could encircle us in the capital city.

To their worries, Park said, “Seoul is the upmost priority. If we take over Seoul, other cities will fall under our command.” Park was firm in his belief that to strike the enemy with a much larger military, you need to strike at its heart.

Revolution is all about surprise, a preemptive strike that must be put in motion before the enemy moves.

That’s how Mongolia’s Genghis Khan conquered his homeland and reached the eastern part of Europe with a 100,000-man military. The legendary conqueror prioritized hitting the central point of a city he targeted.

During the fateful final meeting, I said, “Whether the revolution succeeds or fails is not determined by the size of our forces. It is determined by how resolute we are. We need to be willing to sacrifice our lives to make it succeed.”

Then I referred to a famous quote by Admiral Yi Sun-shin.

“Admiral Yi said if you are willing to die, then you will live through a battle. But if you wish to hold onto your life, you will die in battle. As he said, if we are willing to put our lives on the line for this, we will make it happen.”

Lt. Col. Park Won-bin, who led operation planning, said, “As of midnight on May 16, I will give a deployment order in the guise of an emergency drill.”

We agreed to set our first command center at Seoul’s sixth military district command and move it to the headquarters of the Korean Broadcasting System and then to Army Headquarters.

All 25 men at the meeting, including myself, were in a very somber mood because the next time we would meet each other would either be at Army Headquarters or in our graves.

I could not just let them leave. If our plan was foiled, it would be my last time seeing them.

I handed each man enough money to buy a bag of rice, telling them to buy their families a nice dinner for what could be their last suppers with their loved ones.

Our two previous plans going awry actually turned out to help us come to a better plan.

The first plan was to mobilize forces on the first anniversary of the April 19 Revolution that took down the Syngman Rhee government. We expected massive street demonstrations, and we planned to turn riot forces against the government along with our mobilized forces. But on April 19, no major rallies were held, forcing us to postpone our plan. That change of plan made me realize that we must move first on our own rather than expect help from anyone outside.

We must write history and form the future of Korea on our own terms.

On April 20, I visited Park Chung Hee and told him we should mobilize our forces independently to strike Seoul on a date and at a time that we chose.

So we agreed May 12 would be our revolution D-day. But once again we were forced to delay for four days after our plan was leaked to the military’s top chain of command.

The leak was made inadvertently by Col. Lee Jong-tae, who was part of our group, when he spilled some details of the plan on a bus to a military officer sitting next to him in a bid to win him over. The officer tipped off the top chain of command, including then-armed forces chief of staff Chang Do-young, who was briefed about it.

But in what can only be seen as a display of complacency and incompetence, the military leadership took no action other than to arrest Colonel Lee. It did not bother to dig deeper into our plan, which would have put all of us on death row for treason.

The military’s inaction reminded me of the incompetent military leadership before the Korean War. In December 1949, six months before the outbreak of the three-year war, I presented an analysis of the North Korean military in which I predicted it would wage a full-scare war within a year and proposed to beef up our combat readiness. I was shouting into a deaf ear. The top command had an it-will-be-all-right mindset, and six months later it was overrun by the powerful North Korean army, which led Seoul to fall under the enemy forces.

Eleven years later, they had the exact same it-will-be-all-right mindset. They did nothing.

And we were ready to pull them down in our revolution.