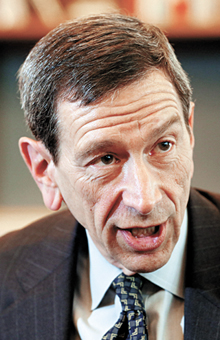 American nonproliferation expert Robert Einhorn said that Washington’s “gold standard” of nuclear cooperation agreements - which legally binds its partners to forswear enrichment and reprocessing - does not apply to South Korea.

This is because Washington “recognizes that Korea is an advanced civil nuclear power ... [and] that there may be the possibility of reprocessing and enrichment in South Korea in the future,” said Einhorn, a senior fellow at the Washington-based think tank the Brookings Institution, in an exclusive interview with the JoongAng Ilbo at the newspaper’s headquarters in central Seoul Wednesday.

“It’s one thing for the United States to ask the United Arab Emirates to accept the gold standard, which is to say to formally renounce reprocessing and enrichment,” said the former secretary of state’s special advisor for nonproliferation and arms control during the Barack Obama administration. “The U.S. will never ask South Korea to do that.”

Korea and the United States are looking to conclude a bilateral nuclear cooperation agreement soon, after four years of negotiation.

The 1974 bilateral nuclear energy pact, sometimes referred to as the 123 Agreement, prohibits Korea from enriching uranium and bans the country from reprocessing spent nuclear fuel rods from nuclear reactors.

Whether the revision of the current civilian nuclear cooperation agreement would include the “gold standard” clauses, which explicitly prohibit uranium enrichment and reprocessing spent fuel, has been a key point of contention between the two countries in the negotiation process.

“I think this is going to be very different from the earlier 123 Agreement,” said Einhorn. “This is not a big brother, little brother agreement. This is an agreement between peers, between the U.S. and South Korea, which has become one of the world’s leading nuclear powers.”

Einhorn, the top U.S. negotiator on the nuclear energy talks with Korea from 2010 to 2013, added that he is certain the new agreement would pass the U.S. Congress.

“I think it was very inappropriate for the Chinese to raise this issue publicly,” he said.

“The Chinese are trying to intrude into this internal consideration in South Korea ... It’s not right for China to try to exercise a veto on what South Korea needs to do in its own defense. If China is so worried about missile defense deployments in South Korea, then it should be more active in persuading North Korea.”

Q. What can we expect of the revised nuclear cooperation accord?

A. Our industries are intertwined. The United States is a subcontractor to the ROK in the UAE agreement ... And this agreement is really a win-win, a win for each side. And it’s a compromise, in a compromise neither side gets everything. I used to be the negotiator on the American side. And to be honest, the agreement doesn’t contain everything I want. I know I’m considered a hardliner, and the United States made compromises that I would have been reluctant to make. But I believe these compromises were in the best interest of concluding a deal between two close allies. So I think this agreement, as I understand, will address very effectively the three key goals of President Park [Geun-hye]. One is addressing South Korea’s spent fuel storage problem. A second is ensuring a reliable supply of enriched uranium for South Korea’s reactors. And third is to facilitate South Korea’s nuclear reactors exports. And I think the agreement will do that very well. I think what it does is address South Korea’s compelling near term requirements, while deferring issues that require further research and study...

On issues like advanced consent to pyroprocessing and enrichment, the answer provided in the 123 Agreement, is not “No.” It is “Not now.” What it says is we need to know more about pyroprocessing, it’s been proven, it’s been demonstrated at a laboratory scale, but not at a commercial scale, and we need to understand it better. While we are studying it, and there’s a joint fuel cycle study that’s unprecedented, we will review this issue and we can make a decision later ... The compelling need today is to work on an interim spent fuel storage arrangement. The U.S. and [South Korea] have begun cooperation in interim storage, and this agreement will facilitate that. This agreement will contain some unique features that are not in any other U.S. agreement of cooperation. It will provide for the institutionalization of bilateral consultations at a very senior level, at a subcabinet level, that will enable the two countries to address evolving technologies and ... promote bilateral cooperation.

What was the biggest issue during the negotiation process?

The biggest issue was the question of advanced consent. And the U.S. started out with the position that we should simply adopt the approach taken in the first agreement, the agreement that will expire soon, which is no advanced consent. That was our position. But we listened to the [Korean] negotiators, and the ROK negotiators were very tough, they were very insistent on meeting South Korean requirements, and they made clear that this was not sufficient. So the U.S. eventually agreed to compromise and instead of saying “No,” it said, “OK, let’s have joint study, let’s review the results of the study, and we can reconsider this issue later.”

The duration of the new agreement may be 30 years or less-will it be easy to revise this agreement?

During the agreement, there will be a provision that in this bilateral mechanism, the two sides can review the arrangement, and if they agree, they can revise the approach on consent, on advanced consent, so they’ll have the opportunity to review and adopt a different approach even during the agreement. But on duration, this agreement will be the shortest [nuclear] agreement that the U.S [has concluded and] much less than 30 years...

How would it affect Korea’s science and industry arena?

I understand that elements of the Korean nuclear establishment would have liked the agreement to do more ... But we need to learn more about pyroprocessing, and we can afford to take the time to do more. On enrichment, I know that ... Korea would like advanced consent today to enrich U.S.-supplied uranium. But it’s not necessary; the international market in enrichment is in surplus. Enriched uranium is widely available. South Korea has been importing enriched uranium from several sources. There have never been any supply disruptions. If South Korea wants additional insurance, it will be possible to invest in a multinational enrichment operation, like the ... URENCO plant in New Mexico.

Is Washington getting sick of the troubled Korea-Japan relationship?