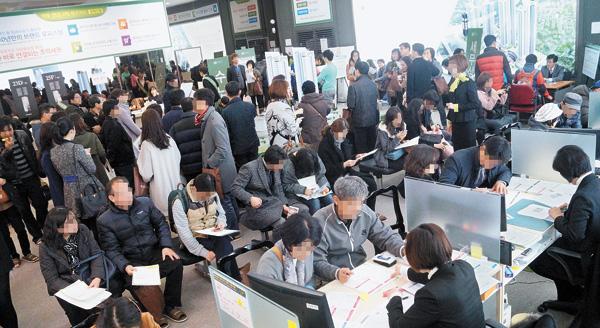 Investors crowd into the model house of Prugio officetel in Mapo, downtown Seoul, on March 15. Provided by Daewoo E&C

On March 13, the model home for a Prugio officetel in Mapo, Seoul, was crowded with visitors. It was three days after the Bank of Korea cut the key interest rate to its lowest level ever at 1.75 percent. The reduced borrowing rate has raised investors’ interest in leasing and buying property, particularly officetels and commercial units.

“Investors not only from the greater Seoul area but also from provincial areas have taken interest,” said Lee Seon-yong, who was overseeing the pre-sale of the officetels. The bid for units, held between March 13 and March 16, averaged 13.7 to 1. The highest bid for the units with the most floor space and best location was 15.3 to 1.

Gwanggyo Worldmark Square, a half-commercial, half-residential complex in Gwanggyo, Gyeonggi, sold six commercial units on March 14 and 15. The complex had trouble attracting buyers for its commercial units, selling only four or five retail spaces in all of February, but after the central bank’s monetary policy decision was announced, things turned around.

“The number of people who are visiting or making reservations at our promotion office has more than tripled,” said Kim Young, who oversees pre-sales at the commercial-residential complex.

With the interest rate at an all-time low and the market expecting another cut, instead of stashing away cash in bank deposits, investors are now on the lookout for properties that could generate a monthly income, like stores and officetels. Inquiries on any property that could turn a profit have more than doubled, and some investors are even asking realtors if they have small or midsize buildings available to purchase.

This is because interest on bank deposits has fallen to between 1 and 2 percent, whereas the annual profit rate from the monthly rent made on an officetel unit, a commercial store or a building is estimated to be about 4 to 6 percent.

Among those, individual officetel units are the most popular property to invest in because they cost less than commercial space and buildings.

Including the necessary loan, it usually costs 20 million won to 30 million won to buy an officetel. But more importantly, the annual investment profit rate is more than 5 percent.

In Seoul, the neighborhoods with the highest profit return were north of the Han River in Gangbuk and Geumcheon.

A study by Budongsan 114, a real estate portal, showed that the profit rate of Gangbuk and Geumcheon was 6.2 percent last month. Dongdaemun, near downtown Seoul, trailed behind at 6 percent. The profit rate for Gangseo in southwestern Seoul was also 6 percent.

South of the Han River, where property is considered expensive, did not bring in as much profit as Gangbuk or Geumcheon, staying just above 5 percent.

Seocho, one of the three more expensive districts south of the Han River, reported a profit return rate of 5.2 percent on officetel leases. Gangnam had a smaller return of 5 percent. Songpa, which is also a pricey neighborhood in southern Seoul, reported a relatively lower profit return of 4.6 percent.

But some other areas were bringing in returns as high as 9 percent.

Wealthy investors are usually more interested in buying small and midsize buildings or commercial units because they have a longer lease period and therefore provide steady income.

The size of the loans required to purchase these properties is much larger than that of an officetel, but the lowered key interest rate has eased the burden.

“Since the rate cuts, investors who were considering purchasing such properties are signing their contracts,” said Hwang Jong-seon, of Korea Asset, a company that specializes in the building trade.

Many market experts predict the trend will continue.

“Because investors can’t make a profit from stashing money in the bank, for the time being, the floating money will keep flowing into profit-generating properties,” said Kwon Dae-jung, a professor specializing in real estate at Myongji University.

But experts say that when jumping into such a big investment, one must be cautious.

“Like any other real estate investment, the purpose of investing in officetels is all about making a profit,” said Lim Byeong-cheol, a senior researcher at Budongsan 114. “In particular, the owner would have to make more than 5 percent on their investment profit rate in order to avoid financial losses because various government payments including life insurance and national pension payments will go up when they lease an officetel.”

Researchers advise that a potential investor should monitor the lease demand in the area to avoid ending up with huge financial losses if there is not enough demand, regardless of the quality of the officetel units.

They say that the best locations for officetel are neighborhoods close to university campuses or business areas.

For commercial units, investors must carefully monitor whether the area will become bring in enough business once construction of the building is complete.

Budongsan 114 advises investors to avoid neighborhoods that have an oversupply of small-size housing units.

Although some of the officetels in Gangseo are generating among the highest profits in Seoul, it is also one of the neighborhoods with the largest supply of officetel and small-size housing units for singles. Including the units that will be completed in 2016, there are more than 19,834 single-housing units in the area, 11,937 of which are officetels.

Gangnam trails closely behind with 10,225 units and Songpa with 9,868. Even Dongdaemun, Guro, Gangdong, Joongrang, Eunpyeong, Gwangjin and Gwanak have more than 5,000 housing units for singles.

As competition is high in Seoul, some realtors are advising investors look to Gyeonggi instead. Though the price of buying an officetel is cheaper there, the income made on the monthly rent is almost the same as in Seoul.

Also, before investing in a unit, one should compare the sales or lease price with that of units in neighboring areas.

“When investing in a lease there is always the risk of being unable to attract tenants whether it’s residential or commercial,” said Lee of Shinhan Investment. “Because the tax on the investment is also huge, one needs to incorporate it when estimating the investment profit returns.”