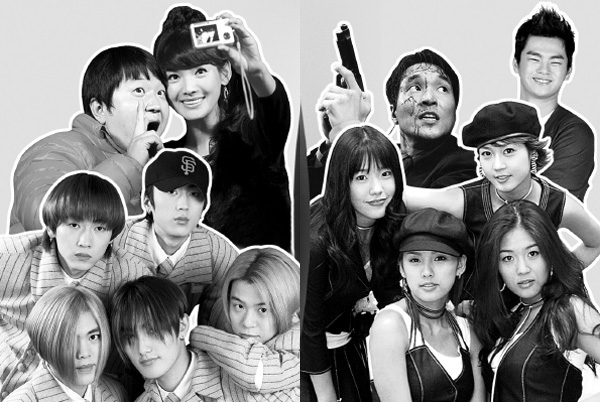 The arrival of cable TV channels in Korea 20 years ago brought more celebrities into the homes of fans through the small screen. Counterclockwise from top left: Comedian Jung Hyung-don and actress Jung Ga-eun were the main characters of “Fun TV Rollercoaster,” one of the first programs a local cable TV channel produced from scratch. Boy group H.O.T and girl group Fin. K.L danced on many music channels, and actor Han Suk-kyu of “Swiri” starred in the first Korean blockbuster, which would not have been possible without the influence of cable TV channels. Singer Seo In-guk became a star after competing in survival audition program “Superstar K.” [JoongAng Ilbo]

It has been 20 years since cable TV came to Korea. The arrival of 24 channels, which each concentrated on one genre, such as music, travel, food and even religion, contributed to introducing a variety of shows made overseas.

Before 1995, the home audience only had five terrestrial channels to choose from: KBS, KBS2, SBS, MBC and EBS. When cable launched that year it was highly welcomed by audiences who wanted more in-depth information about their interests in a variety of issues and industries. 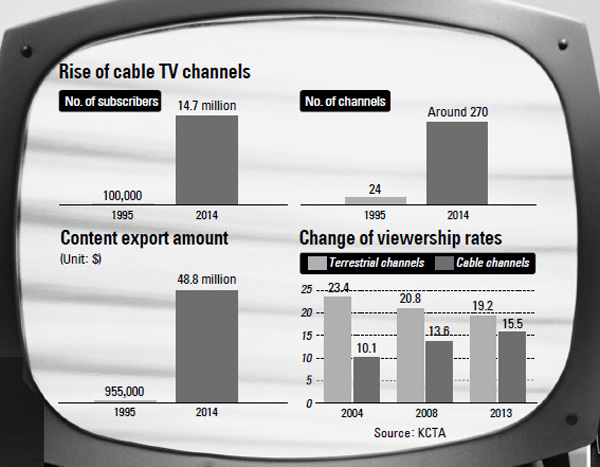 The cable channels introduced TV shows from other countries to Koreans. Many popular programs, including U.S. sitcoms “Friends” and “Sex and The City,” garnered much attention here, and inspired local cable channels to produce their own series.

Several other cable channels then moved on to creating alternative content, such as Mnet with survival audition series “Superstar K,” which garnered a viewership rating of more than 10 percent - a large score for a cable channel.

Hit drama series such as “Reply 1997” and “Reply 1994” on tvN followed, proving how audiences were moving from terrestrial to cable to find their entertainment.

These channels have seen success outside of Korea, making extra sales by exporting the formats of programs overseas. “Superstar K” was sold to China, and many others shows are in talks to be aired elsewhere outside of Korea.

Before 2011, cable channels only aired programs exclusively about one genre - for example music channels only showed music-related shows while travel channels only broadcast issues regarding the tourism industry.

But, the arrival of new general-programming networks such as JTBC, made it possible to expand the ground for these cable channels to grow further.

The arrival of channels showing programs with multiple themes on cable also lured a wider audience away from terrestrial channels like KBS and SBS.

“In many different genres of programs, [these general-programing channels] have seen better performances than terrestrial channels,” said Prof. Kim Seong-cheol of Korea University’s School of Media and Communication.

“Now, cable TV channels need to evolve to more conclusive media outlets that even include online audiences so that they can appeal to people in the overseas market by investing more into video-streaming services.”

Although many pulled their networks due to lukewarm performances, big-name companies including Samsung Group led the way for other companies to invest further in producing cultural content.

When Samsung put money into the movie channel Catch One - and Daewoo did the same for DCN, now film broadcaster OCN - they opened doors for large companies to invest in creating movies. The implementation of a planning, marketing and directing system modernized Korea’s film industry.

In the same year that Samsung Group launched its video department, in 1995, it also began investing in the domestic movie industry, leading to the production of the first-ever Korean blockbuster, “Swiri” in 1999.

Paving the way for Hallyu

H.O.T’s debut the following year signaled a new era of pop stars in Korea. The word Hallyu, referring to the Korean Wave, was first used during the boy group’s performance in Beijing in 1999.

“1995 was when the framework for Korea’s pop culture started to set up as media platforms changed due to the arrival of cable TV channels,” said Min Seong-wook, professor at Paekche Institute of the Arts. “The demand for cultural content increased and the overall pop culture industry has become more developed since then.”