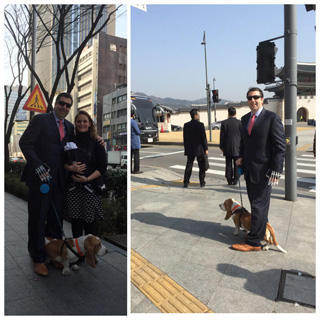 U.S. Ambassador to Korea Mark Lippert returns to work Thursday, two weeks after he was slashed by an anti-American activist with a knife at a breakfast event in Seoul on March 5. Lippert posted photos on his Twitter account to announce his return. The ambassador wrote, “Great to walk into work today.” In photo on the left, he is seen with his wife Robyn and baby boy James William Sejun, as well as the family dog Grigsby.