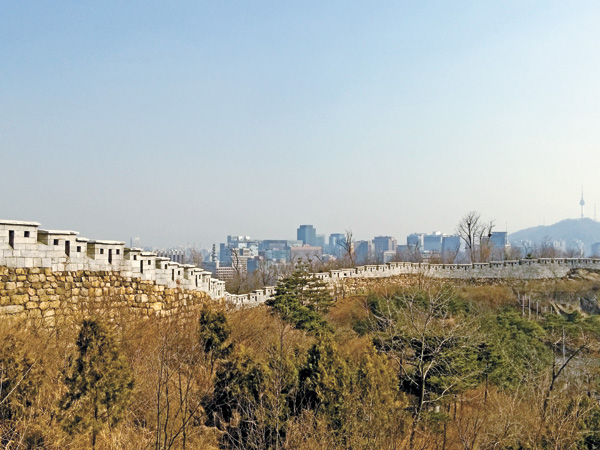 View of a trail walk along the Seoul City Fortress near Mount Inwang. People can see the central Seoul over the fortress. By Kang Ki-heon

In line with Korea’s bid for Seoul City Fortress to be inscribed on Unesco’s World Heritage list by 2017, the JoongAng Ilbo will introduce the history behind the 600-year-old structure.

The Korea JoongAng Daily affiliate will delve into stories related to the wall built to surround Hanyang, the Joseon Dynasty (1392-1910) capital now known as Seoul, for its new “Worthwhile Walks” series.

Parts of the trail that spans the fortress neighboring Mount Ingwang will be the focus of the first article.

The fortress can easily be spotted while walking for about 10 minutes towards Seoul Metropolitan Office of Education from Seodaemun Station, line No. 5.

It has had the same facade since 1396 when Taejo Lee Seong-gye established the Joseon Dynasty.

After walking 10 more minutes from Seoul Metropolitan Office of Education, visitors will arrive in front of Jongno Cultural and Athletic Center. This is where the fortress trail truly starts.

But before actually walking, they need to choose whether they want to go inside the trail, which is more like meandering through a well-manicured garden, or on the outside of the fortress, which feels more like a rougher trek.

One passerby that this reporter ran into opted for the more adventurous option, even though he needed to use a cane to help himself along.

“The fortress looks most beautiful at night, and you have to walk along the outside of it,” said 77-year-old Jang Seon-geun.

Some regular visitors believe it is better to walk along the outside of the trail to appreciate every detail of the wall’s construction.

Even on a weekday there are more people than expected enjoying the area. Park Yeon-jeong, a 54-year-old homemaker, said she was taking a walk to experience the new spring season.

“It feels like I’m living in a time period few hundred years ago as I walk fortress that looks very different from one point to another,” she said.

Locals back in the Joseon Dynasty usually picnicked around the locale in warmer seasons.

“Hangyeongjiryak,” a book written by Yu Bon-ye, son of Joseon era scholar Yu Deuk-gong, states that many people from Hanyang came in groups during spring and summer to walk around the fortress and see the landscape.

Some walls of the fortress have been constructed in different styles. Left is constructed during the rule of King Tae-jo of Joseon and more rectangular right is piled during that of King Sejong. [JoongAng Ilbo]

As it is so well preserved, the trail near Mount Inwang has become the starting point. Since many people say they can easily feel the historical nature of the area here, people call the trail a living museum.

It also has a more modern history. The walk was closed for 25 years after some pro-North Korean spies, including Kim Sin-jo, tried to attack the Blue House in 1968 by using it as an access point.

After the incident, the security level around the area tightened.

But this was actually a boon for the trail as it meant it was preserved and escaped the fierce development trend that swept Seoul after this period as a result. As no one was allowed to enter the area, it was safe from being destroyed.

To tout the cultural site to the rest of the world and lure in travelers, Korea is attempting to designate the entire fortress as a Unesco world heritage site.

The fact that the fortress has survived to witness the changes of one dynasty being established, and that it still remains today, has contributed much to the push for global recognition.

“Seoul is the only city with a population of around 10 million that bears a large fortress,” said Seung H-Sang, Seoul Metropolitan Government’s head architect.

“Many well-known cities are mostly built in a flat land, but Seoul was able to develop in this way as it embraced its many mountains.”

It is also a plus that the fortress not only carries historical meaning but also functions as a park where many can have a quick stroll around.

By the time visitors reach Poet Yun Dong-ju Hill, they can take a quick rest to wipe away any perspiration. This is where Yun, a poet living under Japan’s colonial rule of Korea, wrote his most famous poem, “Prologue,” which depicts his will to live a conscientious life even in the time filled with despair.

A literary museum commemorating the poet and a rock inscribed with lyrics of the aforementioned poem stand on the hill.

The poet frequently visited the area as he lived in Nusan-dong, northern Seoul, near Mount Inwang when he was attending what is currently Yonsei University.

It is the only small gate along the fortress wall that still has an upper deck intact over the gate.

“The structure burnt down after the Japanese invasion of Korea [1592-98], so King Yeongjo set it up again in 1740 and hung a wooden board inscribed with names of aristocrats on it,” said Jeong Mi-deok, the manager at Jongno District Office’s tourism team. 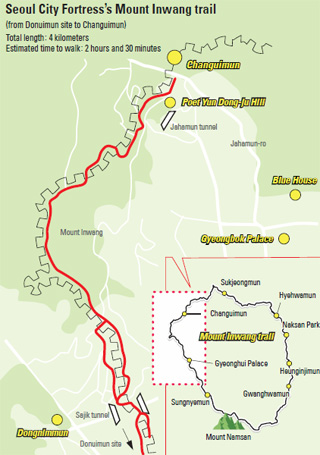 The aristocrats on the wooden board contributed to dethroning Gwanghaegun, the 15th king of Joseon and crowned Injo.

One of the things you will notice as you walk the trail is how the large stones used to build the wall differ in the way they were piled up.

Curator Shin Young-mun of the Seoul Metropolitan Government said that while looking at the fortress it is easy to tell that some parts of the wall were built in different eras.

The major construction for the fortress was done during the regime of Taejo, the first king of Joseon, and then during that of King Sejong, the fourth, and King Sukjong, the 19th.

Since it was crucial to build a fortress to protect new capital, the rocks were less refined in the parts built up in early Joseon in order for the workers to be able to expedite the overall process.

King Sejong tried to make the fortress sturdier. Bigger rocks were put on the bottom to make a strong base and then smaller, round rocks were piled up.

Rocks used in the early Joseon were refined and used again.

King Sejong recruited 320,000 workers nationwide to renovate the fortress in 1422 - three times more than the number that constructed it during King Taejo’s regime.

King Sukjong used bigger and squarer-shaped rocks to further renovate the fortress in 1704 after the 1592-98 Japanese invasion of Korea.

The rocks were so heavy that four adults were needed to move each one.