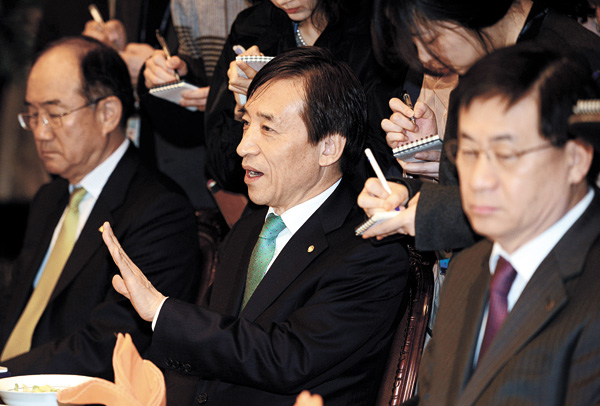 Bank of Korea Gov. Lee Ju-yeol speaks at a monthly meeting with local bankers at the headquarters of the central bank in Seoul Friday. [NEWSIS]

Although the market responded positively to U.S. Federal Reserve’s Chairwoman Janet Yellen comments on the timing of a U.S. interest rate hike, Bank of Korea Gov. Lee Ju-yeol kept a cautious stance and warned that risks from uncertainties have actually grown.

He said not knowing the exact conditions in which the U.S. central bank will hike interest rates has only expanded insecurity.

“The uncertainties have risen higher and the possibility of larger volatility in the financial markets has grown,” Lee said during a monthly meeting with local bankers at the Bank of Korea’s headquarters in downtown Seoul, Friday. “More important than the timing in which the U.S. Fed will raise the interest rate - whether it is in June or September - is the speed at which it will be raised.

“This is because [the U.S. Fed] won’t be raising the interest rate just once or twice, but once they start raising it, it will be raised consecutively.”

Seoul’s primary market, the Kospi, on Friday took a breather and remained relatively unchanged compared to Thursday and it only dipped 0.03 percent or 0.65 points from the previous trade to close at 2,037.24. But on Thursday the market reached this year’s highest record of 2,037.89 after March’s Federal Open Market Committee meeting in the United States overnight.

Investors across the globe took Yellen’s comment as clarification of the uncertainty surrounding the timing of any interest hike increase.

Lee, however, projected that the U.S. Fed will not raise the interest rate sharply this year and will likely keep the near zero policy rate until the end of this year.

“Even if they raise the interest rate [this year], the increase will likely be gradual,” Lee said. “This is to reduce the impact on the market.”

The BOK surprised the market earlier this month when its monetary policy committee lowered the key interest rate, shaving 0.25 percentage points to bring it to an all-time low of 1.75 percent.

Since the second half of last year, the central bank has been taking a more aggressive stance in boosting the struggling domestic economy by cutting interest rates.

The first move came in August when the rate was lowered to 2.25 percent from the previous 2.5 percent, which was the first rate adjustment in 15 months. In October, it lowered the rate to 2 percent, which was an all-time low at the time, to further support the government’s economic stimulation campaign.

The market was expecting another rate cut as early as April after the domestic economy showed little response to last year’s cuts.

This month’s move was interpreted as a desperate one by the Korean central bank and the government as low-inflation, low-growth sentiments seemed to be pushing the Korean economy into deflation, while what seems to be a currency war between major economies including the European Union, Japan and even China has been expanding in recent months.