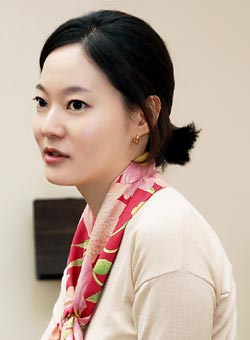 Diplomat Yoo Myung-jin is set to become Korea’s first female envoy to be posted in Afghanistan.

A Foreign Ministry official in the North American Affairs Bureau in charge of Korea and U.S. security cooperation, Yoo, 33, volunteered for the position in Afghanistan, which she refers to as the “frontline” of the Korea-U.S. alliance.

“I was looking for a challenging and fruitful location, and I began to desire to work in Afghanistan,” Yoo said in an interview at the Ministry of Foreign Affairs in central Seoul.

She will be posted at the Korean Embassy in Afghanistan’s office in the Bagram Airfield for one and a half years.

“If I go there and pave a new road, I hope I can have a positive influence on my junior colleagues,” she said.

“There are those who are concerned as well, but Afghanistan is somewhere worth working as a diplomat,” Yoo added. “Afghanistan is the frontline for the global Korea-U.S. partnership.”

Yoo, a Seoul National University graduate who joined the Foreign Ministry here in 2007, has dealt mainly with the Korea-U.S alliance over the past nine years, including the free trade agreement (FTA) between Seoul and the United States.

She will be tasked with overseeing the Bagram Korean Hospital as well as the protection of Korean workers in the country.

Afghanistan’s capital Kabul had over 100 terrorist attacks last year, and in February 2007, 27-year-old Korean Sergeant Yoon Jang-ho was killed in a suicide bomb blast in Bagram.

But in regard to the dangers, Yoo said, “Confucius once said one can be called a true civil servant if one does not disgrace the king.”

She added that many of her colleagues working in dangerous and difficult regions “hold onto such a mentality as diplomats.

Yoo was scheduled to depart on Saturday.

“It’s a pity that I am departing on White Day,” she said, referring to the day following Valentine’s Day on which women present their significant others with chocolate. “But I’m content being single for now.”