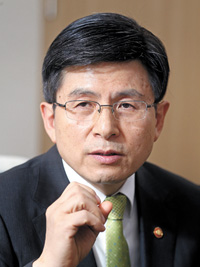 Justice Minister Hwang Kyo-ahn, who celebrated his second anniversary in office earlier this month, discussed a variety of issues in an interview with the JoongAng Ilbo on Thursday, some highly controversial.

The 57-year-old commented on his prosecutors’ ongoing investigations of large corporations, including the country’s top steelmaker Posco and other companies that took part in the former administration’s resources diplomacy initiative, an attempt to secure natural resources for Korea through large investments overseas.

“Prosecutors cannot choose the coverage of their investigation as they please, and I won’t let that happen, either,” he added. “The general guideline of the probe is to cut out corruption and revitalize those companies. I will ensure I won’t discourage them by tying their hands and feet because I also say the economy should be revitalized.”

Q. It’s been more than two years since you took office.

A. I don’t want to be remembered as a minister who served for a long time, but as one that did what he was supposed to do properly. I’ve tried to do what’s essential for the safety and security of the country and the public. During my term, the Unified Progressive Party (UPP) was disbanded as a political party and I also made sure illegal demonstrators were punished.

What was the reason for starting the lawsuit to disband the UPP?

When Lee Seok-ki, who had been sentenced to prison for establishing an anti-government organization, was elected as a lawmaker in 2012, many prosecutors and judges worried about it and discussed countermeasures. We began to review disbanding the party when Lee was accused of conspiring to overthrow the government in 2013. We filed the constitutional lawsuit because the activities were against the basic rules of democracy stipulated in the Constitution.

You delivered the closing argument in November at the Constitutional Court.

I quoted the saying that a small ant’s tunnels can break down an entire embankment because I deeply regretted that we do not take those who threaten our national security seriously.

You were trained with Constitutional Court Chief Justice Park Han-cheol at the Judicial Research and Training Institute and worked together for a while.

We’ve never met personally after we filed the lawsuit about the UPP and we’ve never had conversations at official events or on the phone because I was worried the public might come to a misunderstanding that could lead to a concealing of the truth.

What do you think of the brutal assault on U.S. Ambassador to Korea Mark Lippert?

Such terrorism should not happen again, and it was a case that revealed how our legal system is vulnerable to such incidents. It’s been said that an anti-terrorism act was filed with the National Assembly, and I believe countermeasures against terrorism should not violate human rights of ordinary people.


The corruption investigation of large companies began after Prime Minister Lee Wan-koo said he will root out corruption in a speech.

The prosecution could not properly carry out its investigation last year due to the tragic Sewol ferry accident and other pending issues. Internal investigations resumed in October and November, and data that accumulated since then are now having an effect.

What do you think of criticism that the investigation is aimed at the former Lee Myung-bak government and its friends because President Park Geun-hye has come into her lame-duck period?

Our focus is crimes, not politics, and evidence, not the timing. People say bigwigs from the former Lee administration are being investigated, but the so-called resources diplomacy began in 2005, far before the former administration.

We are not judging all cases of resources diplomacy, but only those with corruption allegations.

There will be no investigation if there is no crime. We are not investigating the ones we hate, but ones that are believed to have committed irregularities.

Some say the investigations won’t be good for the economy.

We don’t amputate an entire arm due to a boil. Prosecutors cannot choose the coverage of their investigation as they please, and I won’t let that happen, either.