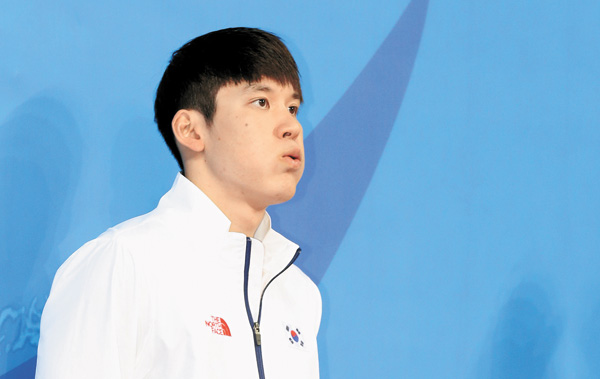 Judgment day has arrived for Olympic gold medalist Park Tae-hwan as FINA, the international governing body for aquatic sports, will hold a hearing in his doping case at its headquarters in Lausanne, Switzerland, on Monday, local time.

Park became the first Korean swimming gold medalist in the Summer Games when he won the men’s 400-meter freestyle in the 2008 Beijing Olympics.

He reportedly left for Switzerland on Thursday.

The FINA doping panel consists of Chair Robert Fox of Switzerland and representatives from the United States, Australia, Japan, South Africa and Algeria.

FINA regulations require the hearing result to be announced within 20 days, but many expect an announcement in about three days, given the panel’s track record.

Park will have 21 days to appeal FINA’s decision to the Court of Arbitration for Sport.

Park, nicknamed Marine Boy, tested positive for testosterone on Sept. 3 prior to the Incheon Asian Games.

He blames a Seoul hospital doctor who injected the 25-year-old swimmer last July after Park asked if the substance in the syringe, named Nebido, complied with World Anti-Doping Agency (WADA) rules.

Park, who also has two Olympic silver medals, in January asked local prosecutors to investigate. The doctor subsequently was indicted on a charge of professional negligence.

It is still unclear why the swimmer decided to take a substance that is known as a treatment for erectile dysfunction.

Under WADA rules, Park could be banned from the sport for two years.

FINA first collected a urine sample from Park on Sept. 3 and notified the swimmer of the result in late October. Park requested a retest, which was administered in December with the same result.

If Park receives a ban, it is likely to be applied retroactively from Sept. 3.

But a ban of any length of time would result in the loss of the silver and five bronze medals Park won at last year’s Asian Games.

If he receives a full two-year suspension, the Dankook University graduate school student would not be able to compete in 2016 Olympics in Rio de Janeiro.

Even if he receives a shorter ban, a KOC rule would make him ineligible for the Rio de Janeiro Games. Under the rule, an athlete who has been suspended for a positive drug test cannot be selected for the national team for three years from the end of the suspension.

Unless the KOC revises its own rule, Park would not be able to compete until late 2017.

Given his age, that would likely mean that Park’s Olympic career would be over.