After 6 years, case vs. Brown closed

After 6 years, case vs. Brown closed 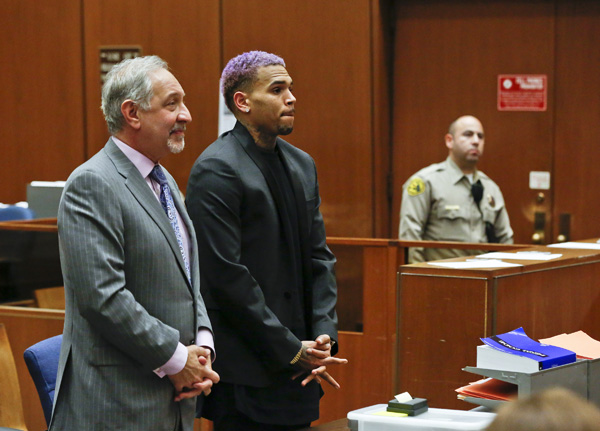 Chris Brown, right, appears with his attorney Mark Geragos at a hearing in the R&B singer’s long-running case involving his 2009 attack on Rihanna in Los Angeles on Friday. [AP/NEWSIS]

Brown and his attorney, Mark Geragos, hugged in the courtroom and again in a courthouse elevator. After the hearing, he tweeted, “IM OFF PROBATION!!!!!!!! Thank the Lord!!!!!!’’

Brown, 25, has been under supervision by court and probation officials since mid-2009, when he pleaded guilty to attacking Rihanna just hours before the Grammy Awards.

The attack led to immediate fallout for Brown, although his career has partially rebounded and he went on to win a Grammy Award three years after the attack.

The singer initially avoided problems with the case, but since 2013 has struggled to complete his community service obligations and had his probation revoked in January after he performed a show in Northern California without permission.

Geragos has told Brandlin his office had inadvertently told Brown he could travel without permission.

“I couldn’t be more delighted,’’ Geragos said after the hearing.

“He is in a spot right now and a place right now that I couldn’t be prouder of him,’’ Geragos said of Brown.

He said Friday’s hearing was “a monumental feat for him.’’

Prosecutors in 2013 questioned whether he had complied with the terms of his community labor sentence, and Brandlin briefly revoked his probation over a hit-and-run case filed against the singer involving a fender bender.

Later that year, Brown struck a man outside a Washington hotel and was charged with misdemeanor assault. Brown was ordered into rehab but was dismissed from the facility for violating its rules and spent two-and-a-half months in custody, with U.S. marshals shuttling him between Los Angeles and the nation’s capital for court hearings.

The singer underwent domestic violence and anger management counseling, and Brandlin ordered him into rehab. While in treatment the singer was diagnosed with bipolar disorder, post-traumatic stress disorder and complications from substance abuse. AP