[Cooking with Her Excellency, Philippines] Kare-kare is a feast for every generation

[Cooking with Her Excellency, Philippines] Kare-kare is a feast for every generation 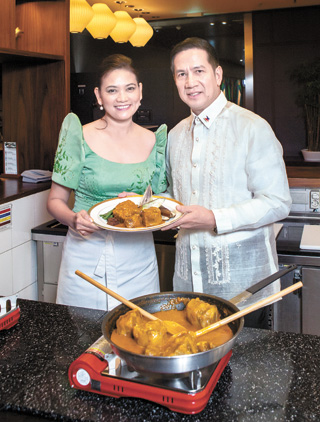 Ana Hernandez and her husband, Ambassador of the Philippines to Korea Raul Hernandez, presents kare-kare, or braised oxtail stew in a peanut sauce, at the InterContinental Coex in southern Seoul last month. By Park Sang-moon

Every great capital has a diplomatic corps representing their countries and promoting their own cultures. Ambassadors are expert entertainers and their spouses are often skilled at introducing the cuisine of their homeland to their foreign hosts. In this series, the Korea JoongAng Daily asks the spouses of Seoul’s ambassadors to introduce our readers to a favorite entree from their homelands.

In each installment, his or her excellency will be joined by a chef from one of the two InterContinental hotels in Seoul who prepares a Korean dish that complements the foreign offering. Tayo’y magsikain, mashitge deuseyo and bon apetit!

One of the many reasons Ana Hernandez, wife of the ambassador of the Philippines to Seoul, chose to prepare kare-kare - braised oxtail stew in a peanut sauce - is because it appeals to all generations.

“The sweet taste of peanut sauce is a delight to children, while the tangy bagoong [shrimp paste] satisfies a more mature palate,” Hernandez said. 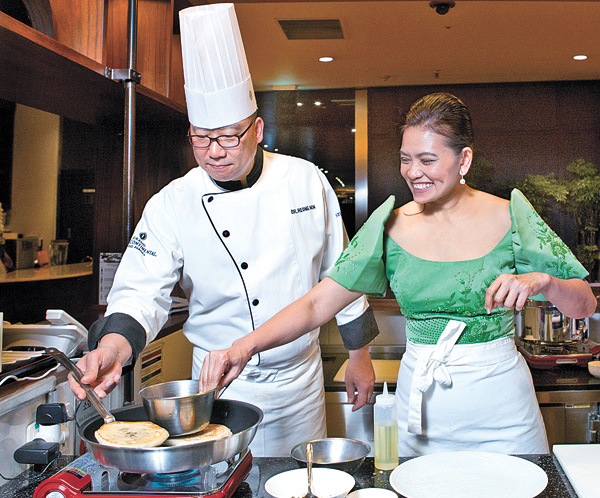 Hernandez travels back and forth between the Philippines, to be closer to their children, and Korea, where her husband lives full time.

During her most recent two-week visit to Seoul, Hernandez stopped by the Asia Live buffet restaurant at the InterContinental Seoul Coex in southern Seoul on Feb. 13 to share her Philippine family-style dish. She was accompanied by Ambassador of the Philippines to Korea Raul Hernandez, who was posted in Seoul last May.

As she maneuvered around the open kitchen, Hernandez explained that people who are short on time can use pre-made kare-kare packages. She also explained that the uncommon vegetables in the recipe can be substituted with local produce.

Chef Oh, who has spent the past 25 years with the Intercontinental Seoul Coex specializing in Asian cuisine, explained in return how to prepare galbijjim, or braised beef ribs.

“Galbijiim is a food that is presented on a good day by a privileged family to a precious guest. It is a dish that should not be left out in celebrations in Korea,” said Oh.

“The more you boil it, the softer the ribs get,” Oh said. “One and a half hour for simmering should be good, but ribs are a tender meat, so the more you cook them, the more tender they get."

Oh offered pointers to both Ana and Ambassador Hernandez, including to chop the carrots and turnips into uniform 3-centimeter (1.8-inch) pieces for aesthetics. “Shape into a rugby ball shape for garnishing,” he advised the couple.

Ambassador Hernandez was engaged in the cooking process, peppering Oh with questions about preparing Korean cuisine.

According to his wife, the ambassador is quite a keen cook.

“I don’t like cooking for myself but for others,” Ambassador Hernandez admitted, and shared that he taught his wife stir-fry dishes when they were dating.

The following is an edited excerpt of an interview with Ana Hernandez.

A. The Philippine cuisine gives so much to my country’s history and culture. Over the years, our cuisine evolved with traces of foreign influence brought about by traders and colonizers. It is influenced by East Asian Indian, Malay, Chinese, Spanish and American cooking. Sour, sweet and spicy are some of the flavors that come to mind, but these do not fully reflect the cuisine of the entire archipelago, where there is an interesting variety in regional cooking. Deep, diverse and interesting are the words that I would use to attempt to describe my country’s cuisine.

Why did you choose kare-kare?

I chose kare-kare because it is a dish that appeals to both the young and the old. I also think that this is one dish that Koreans might like and that they can cook easily with a slight variation in the cooking method and the ingredients.

On a personal note, I chose kare-kare because it never fails to elicit beautiful memories of my childhood in the province of Pampanga [northern Philippines], where I grew up. This is a family favorite dish and as a community, a fiesta in Pampanga would not seem complete without it.

Now that I have children of my own, I would cook this dish regularly hoping that, just like me, this dish would bring to my children memories of food at home and the happiness it brought to the table.

What ingredients from your country are easily found in Korea?

The other variations of this dish could be seafood or all vegetable kare-kare. The yardlong beans can be substituted with French or string beans.

What ingredients are hard to find?

The young banana blossom may not be readily available in the supermarkets but may be found in the Sunday market at Hyewa-dong.

What are the best restaurants in Seoul serve Philippine cuisine?

There are also other places that serve Filipino dishes. “KC Philippines,” for example, is an eatery in the Itaewon District that serves good adobo and other dishes.

The Sunday market in Hyewa-dong is also a good place to enjoy Filipino street food and other popular Filipino dishes.

Please give us your personal observations about Korea, and how it compares to your country or other countries in which you have lived.

The progress of South Korea is admirable. But its allure to me has a lot to do with it being both modern and traditional. Seoul in particular is modern, dynamic and fast paced, but what sets it apart is its traditional character that the people have managed to retain with their food, their products and their language, thus eliciting an aura that is truly Korean.

To me, it is an achievement when a place is able to retain its aura because most of the time, it is what makes it unforgettable.

What Korean dishes are you fondest of?

My favorite is the dolsot bibimbap [mixed rice and vegetables in a hot pot], served sizzling with egg on top.

I love the sound and the smell of bibimbap and have regarded it as my comfort food in Korea. I find it unpretentious, that all I have to do is mix the ingredients and enjoy everything in a spoon. A healthy and slightly spicy bowl of bibimbap for me is never too much, and I enjoy the last bite - digging into the crunchy bits of rice at the bottom. In fact, I find that with my regular travel in and out of Seoul, my stay here is not complete without my dose of bibimbap.

Day before
1. Wash the oxtail thoroughly. Place in a pot with enough
water to cover and boil for 10 minutes. Discard the water.
Cover with water again.
2. Add onion, 1 tablespoon salt, 1 tablespoon peppercorns
3. Bring to a boil and immediately reduce to a simmer.
Cook for 3-4 hours or until tender. Refrigerate.
Serving day
4. Skim and discard the fat. Remove oxtail and reserve
broth.
5. Toast the rice in a skillet until golden brown. Pulse into a
fine powder in a food processor. Pulse the peanuts in a
food processor until creamy. Make bundle out of the sitaw
and tie with spring onion.
6. Heat the annatto oil in a large over medium heat and
saute the garlic and shrimp paste. Add the meat and saute
for about five minutes, then add four cups of the meat
broth. Lower flame and simmer until broth has been reduced
by half.
7. Add the rice, stirring continuously until thick and creamy.
Add the peanut paste. Keep stirring. Turn heat off and keep
covered.
8. In a separate medium pot, fill halfway with water and
add 1 tablespoon salt. Add the beans until cooked but still
firm and green. Add the banana blossom and eggplants
and boil until they can be easily pierced by a fork. Remove
and cool immediately. Serve with vegetables next to karekare.

1. Cut beef ribs into 5-centimeter (2-inch) lengths, remove
extra fat and soak in cold water for about an hour to draw
out blood. Make cuts 2 centimeters deep in the meat. Put
ribs in a pot and pour in 4 cups of water, then boil to cook
meat. Take out the ribs, skim the fat and oil from the stock
and reserve.
2. Cut the turnip and carrot into pieces that are around 3
centimeters long and deep and 2 centimeters wide and
trim the edges to make an even, rounded shape. Soak
dried shiitake mushrooms for about an hour in warm water,
de-stem and halve.
3. Peel chestnuts, including the inner skin, wash jujube and
pit, and toss gingko nuts in an oiled pan to peel inner skin.
Set aside.
4.Separate the egg yolk and whites and fry in a pan, individually,
into a flat white and yellow omelet. Slice into diamonds
with 2-centimeter sides.
5. Mix all the marinade ingredients together. Place the
ribs, turnip, carrots, mushrooms and chestnuts in a pot
and pour in about half of the marinade and marinate for
around 30 minutes. Pour in the beef stock and boil in medium
heat for about an hour.
6. When the broth has reduced to about half, put in the jujube
and gingko nuts, and pour in the rest of the marinade.
Make sure to stir the meat so that the marinade is
evenly distributed. Spoon some of the marinade on top.
7. When the broth has reduced, place the ribs in a bowl
and decorate with the omelets and pine nuts. If there is
any remaining sauce, you can reduce it with starch and
then pour it on top of the ribs for extra flavor and color.

Ambassador Hernandez worked with the private sector in the Philippines and Hong Kong before joining the Foreign Affairs Department in 1993. He arrived in Seoul in May, previously serving as spokesman of the Department of Foreign Affairs from 2011 to March 2014 and as executive director at the Office of American Affairs. He holds the rank of lieutenant colonel in the Reserve Forces of the Philippine Marines.