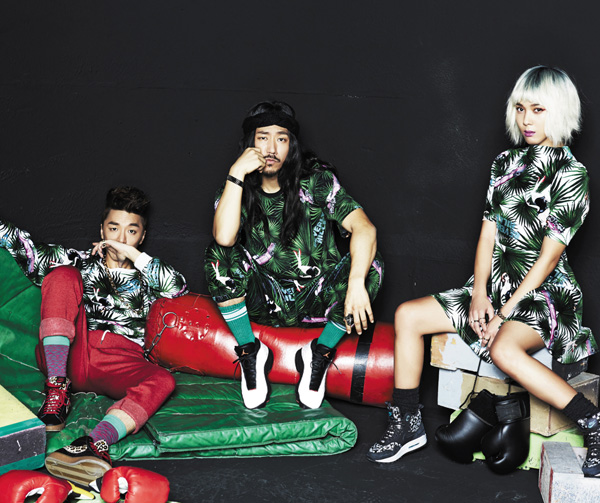 Tiger JK and Yoon Mi-rae, heavyweights in the nation’s hip-hop scene, are back under the name MFBTY, forming a trio with rapper Bizzy.

MFBTY is an acronym of “my fans are better than yours.”

The hip-hop group’s first regular album, with 16 tracks, was released on Friday.

A selection of the songs stay true to the trio’s hip-hop spirit, while new elements have been added to other tracks as the group joined forces with various musicians for the record. 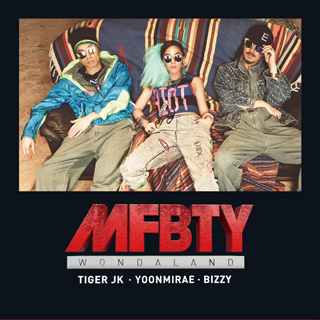 The finished result proves that Tiger JK and Yoon, who both debuted in the late 1990s, can still make new, stylish and enticing music.

“Many would expect us to release a hip-hop album, but this one is themed on the reinvention of K-pop,” said Tiger JK, during a recent press day event prior to the release.

The artist debuted in the music industry in 1999 as a member of now-defunct hip-hop duo Drunken Tiger.

“It’s hard to define the genre of this album. I would say there is no genre. All the tracks are based on rap, but each track has different elements from rock to electronic dance music. That’s the reason we named the album ‘Wondaland.’

“From You Hee-yeol to Yong Jun-hyung to Jeon In-kwon, many people helped us make this album.”

Since Tiger JK and Yoon, who tied the knot in 2007, have focused on serious hip-hop, it may have come as a surprise to many of their long-time fans that they have released a K-pop-themed album and have worked with You, a singer-songwriter known for his sentimental and lyrical songs, Yong, a member of the K-pop boy band Beast, and Jeon, a sexagenarian rock legend.

“I always stay inside a studio producing songs, and I have no clue about how things are going on outside. One day I found my son and nephews reacting to K-pop songs. Seeing them like K-pop, I began analyzing them and making songs similar to them,” sad Tiger JK when asked why he chose the genre as a main theme.

“I wanted to challenge the perceptions of people who think hip-hop can’t match with idol music through this project,” the 41-year-old rapper continued.

All are different, but each will make you tap your feet.

Musicians from all walks of life gave a helping hand to MFBTY, but the hip-hop trio’s identity prevails throughout the 16 tracks, perhaps a testament to how long Tiger JK and Yoon have been making their own music.

Yoon, who is also known as Tasha or T, debuted in the music scene in 1997 at 16 as a member of hip-hop group Up Town.

Born to a Korean mother and an African-American father, she was known to dab on a great deal of foundation in order to hide her darker complexion when she debuted for fear of suffering from prejudice because of the color of her skin.

But the public recognized Yoon as a natural rapper and she stole the spotlight upon her debut.

Her presence in the hip-hop scene still exerts its influence today.

During a recent press event organized by popular cable TV show “Unpretty Rapstar,” in which female rappers compete against one another, Yoon’s name was mentioned up to 10 times, even though she was absent from the event.

Almost all the nine female rappers on the show mentioned her as their role model during the event.

“I don’t know what to say,” said Yoon with a shy smile when she was asked what she thinks of all the praise.

“I feel flattered but I’m still learning, and those compliments sometimes make me feel uncomfortable.”

Yoon was chosen as one of the world’s top 12 female rappers by MTV Iggy in 2012.

Tiger JK and Yoon refrain from personally appearing on variety shows, but this time they said they want to sing more on TV music programs if they are allowed to do so.

“I recently finished filming a talk show ‘Happy Together.’ I want to perform for a long time with this album,” Tiger JK said.

“And I hope we could keep producing feel-good music. Like we mentioned in the intro [of the album], we want everyone - from people to tiny things like bees, butterflies and bugs - to be happy. And that’s the theme for our music, which is love and peace.”