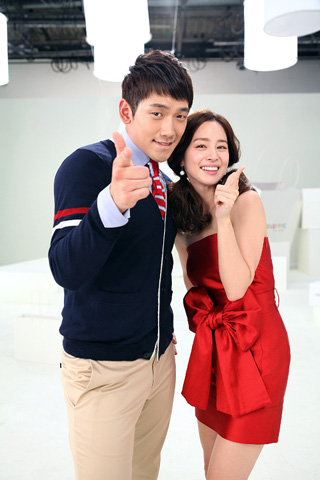 Singer-actor Rain and his actress girlfriend, Kim Tae-hee, reportedly will go on a trip to Jeju Island sometime in the near future.

According to Star News, an online news agency, Rain and Kim recently purchased airplane tickets to Jeju after they both finished shooting Chinese TV dramas.

In order to avoid public attention, the two have been enjoying dates outside the country since they began seeing each other in 2013, but they recently were spotted at a restaurant in Gangnam, southern Seoul.

The restaurant is known as a place run by Baekga, a member of K-pop trio Koyote and a close friend of Rain.

Rain and Kim got to know each other when they were both cast in a TV commercial for a social commerce company in 2013.

They both were involved in a wedding rumor last year.

Some news agencies reported that the two would get married soon after Rain was baptized last July.

Since Rain has not been involved in religious activities but was baptized last year at a Catholic church in Gyeonggi, many speculated Rain decided to join the church in order to marry his girlfriend, who is a devout Catholic.

But agencies of both actors denied the wedding rumor.