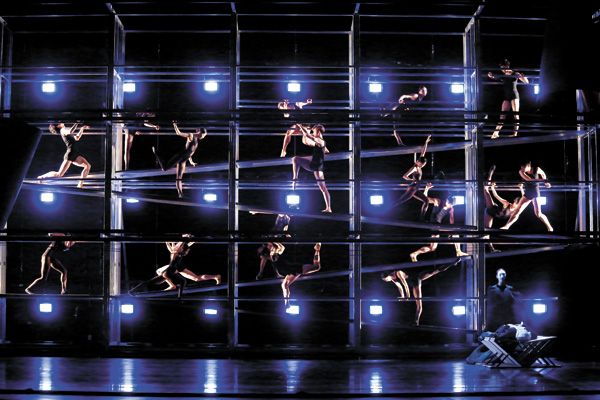 Nacho Duato’s “Multiplicity” showed for four days until Sunday at the LG Art Center by the Universal Ballet Company. Provided by UBC

Whenever ballet performance season comes around, fans wait in anticipation for their favorite repertoires to make casting announcements. When it comes to classical ballet, leading roles are always taken by the best dancers at the company. There are no surprises. It’s stable, but never new.

But in modern ballet it’s a different story. Not only is it difficult to tell the difference between the lead and supporting roles, new faces proudly take center stage. The dancers who were performing quietly in the corner are put out front, making the hearts of those who were rooting for them on the quiet flutter.

That was the case in the Universal Ballet Company’s “Multiplicity,” which premiered last year. At the performance, no principal dancers could be spotted. Instead, unfamiliar rookies, who were highly skilled, dominated the stage.

Nacho Duato’s “Multiplicity” returned to Korea and successfully ended its four-day show on Sunday at the LG Art Center in southern Seoul. 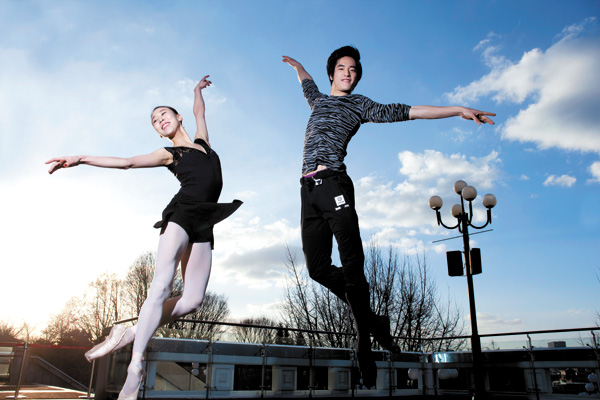 Hong Hyang-gee, left, and Kang Min-woo, right, are two soloists at the Universal Ballet Company. The dancers received high praise as rookies after performing in the premier of “Multiplicity” last year. They performed for this year’s show as well. Provided by Jeon Ho-seong

The performance is dedicated to the life of Johann Sebastian Bach. The story of his existence and death was created by choreographer Duato to the composer’s music, including Cantata BWV205, Prelude from Cello Suite No. 1 and Brandenburg Concerto No. 3. It received favorable reviews for overthrowing the notion that Bach had lived a very reverent life.

For this year’s show, presented by the Universal Ballet, unfamiliar dancers who surprised audiences with their beautiful jumps last year have showed up on stage again.

Kang Min-woo and Hong Hyang-gee, both 26, are soloists at the company. They have known each other since fifth grade as they went to the same school, which finally led them to Korea National University of Arts.

Hong was highly praised for her role as “Death,” despite her young age. Insiders say it is not easy to dance to Bach’s music. Duato himself said he was “fearful to even think about choreographing to Bach’s music at first.”

But he managed to throw away the composer’s excessive rigorism, interpreting it more freely to create a masterpiece.

To get to know more about the two lead dancers, the JoongAng Sunday, an affiliate of the Korea JoongAng Daily, sat down with the dancers. Here are some excerpts from the interview.

Q. For last year’s performance, choreographer Duato himself trained the Korean dancers. Was he as legendary as you expected?

A. Kang: I felt like I was watching someone who was not a human being. Maybe not a god, but somewhere in between? Whenever he was giving demonstrations all our jaws dropped in amazement.

Hong: My role of “Death” has been performed by many dancers with years of experience, so I couldn’t believe when I was cast. I thought I won’t be able to pull it off. Then Nacho told me I was the youngest Death and encouraged me to the end. Bach’s music is like music for “Multiplicity.” The music and choreography go together in such a perfect harmony as if Bach and Nacho collaborated.

As dancers dance like the notes on a music score in modern performances, this must be very different to classical pieces.

Kang: Last year when I first performed “Multiplicity,” I had so many questions. What will they do to my hair? What about my makeup? But Nacho said I should just leave it natural. I shouldn’t put on any makeup or do my hair and leave it as it is.

Unlike classical ballet works that have specific hairstyles for each character, even a specific color of eye shadow, the audience gets to see the dancer as his or herself in modern pieces like “Multiplicity.” Sometimes when my friends come to see me perform in a classical piece they don’t recognize me, but for modern pieces it’s just me, not a character. That’s the charm.

What’s the most memorable scene in “Multiplicity?”

Hong: When Death does the first solo, and the trio with the cello and Bach, I really like it when Death leads Bach in the end.

Kang: I can’t pick one as I like all the scenes. When I saw the performance during the rehearsal, I was really taken aback by the orchestra scene. It was really great and I really wanted to see that in the real performance in the auditorium.

You two have known each other since fifth grade. You must have many memories of each other.

Hong: At school, Min-woo was the only male among 20 students in the Ballet Major class. Girls in other classes thought he was handsome, so they came to our class to see him.

Kang: Thanks to that I learnt how to use my chopsticks properly. I had this funny way of holding them, but since so many girls came to see me, even during lunch, I think I forced myself to use them properly as I felt shy.

Hong: When we went to middle school, we did a pas de deux (duet dance) together. Although I was really close friends with Min-woo I was very nervous as it was my first time dancing with a boy. Since I was dancing with a friend I think I was more embarrassed.

Kang: I didn’t know she was nervous. I remember I just screamed.

You two both went abroad for few years before coming back to Korea.

Kang: When I was in middle school, my father had a stroke and my two little twin brothers have autism. Because of this I was nearly forced to stop doing ballet. But thanks to support from the Universal Ballet Company, I was able to study at Kirov Academy of Ballet of Washington, D.C., when I was in ninth grade. In 2008, I came back and joined Universal Ballet Company. Maybe I erased the memory as I was in so much pain. I don’t really remember struggling. While I was in the United States, my older brother who is five years older than me worked instead of my father and sent me money. So I feel responsible as an older brother for my twin brothers.

Hong: After winning the third place at Prix de Lausanne, an international ballet competition for young dancers, I went to Vaganova Ballet Academy in Russia in 2006. But I encountered a crisis there. I gained so much weight in Russia. Even if you are a very talented dancer, I felt like as long as you are a foreigner, you just get the roles that support Russian dancers. I was very stressed and I guess I ate a lot because of that. I’ve never gained a lot of weight in my life, but during that time in Russia, I gained 10 kilograms. My mother didn’t even recognize me in the airport. I went through a slump but in the end, I joined the Universal Ballet Company in 2011.

Kang: When Hyang-gee first joined the company, she was still in a slump. When she was young she was always the best in class, but when I saw her again at the company she was all depressed and lingered at the back.

So I told her, “Hey, be more active. You’re not yourself.” She’s now a rising star. I am sometimes threatened she may covet my position, but I hope she does well.

Hong: Among soloists we are the only two friends of the same age. We train together and compete together. I think he allows us to develop and advance together. My jump is a little weak so I try to look at male dancers to learn, and I watch Min-woo the most. Min-woo is a great dancer. The reason he has so many fans home and abroad is because he is so attractive when he dances. I never thought this, but I realized it after joining the company.

You are not principal dancers at the company yet. Don’t you feel frustrated with the hierarchy?

Hong: I prefer it. While I was dancing in a group, I learned a lot. As I took one step at a time, I feel like I can work much better in harmony with the group when I perform.

Kang: It keeps us from becoming arrogant. You can remember the times when you were in that situation.

When I first joined, I did “Chunghyang,” and I was so bad I was even kicked out of the group dance and had the role of just standing next to a policeman. How bad was I back in 2008 to just get a role that requires you to stand still? It makes me laugh.

What role do you want to attempt?

Hong: I want to take the lead role in “Swan Lake” as you can show the two sides of the character, and I also want to perform as Tatiana from “Onegin” one day. I saw ballerina Hwang Hye-min performing once, and because it’s a dramatic ballet the face expressions change in every move.

I really want to have a go when I get a little older.

Kang: Those two work for me as well. I will do it with Hyang-gee (laughs). So far, I just did my best with the roles I have been given, but now I started to have the urge to want more. I want to perform “The Sleeping Beauty” and “La Bayadere.” They are two classical pieces that are scheduled to be staged in the second half of this year. I really want a role and to show everything I’ve got.