As walls go up, architectural barriers come down

As walls go up, architectural barriers come down 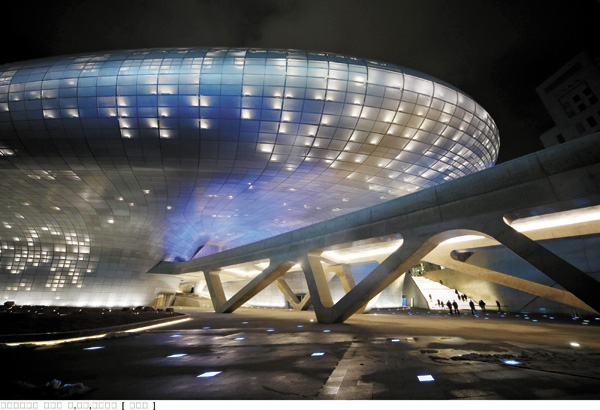 Gone are the days when Korea’s buildings - especially its skyscrapers - took the form of symmetrical rectangles.

The Northeast Asia Trade Tower in Songdo, Incheon; Lotte World Tower in Jamsil, southeastern Seoul; and downtown Seoul’s Dongdaemun Design Plaza, which is referred to as an alien spacecraft among locals, are huge edifices that share one thing in common.

These unique buildings were completed using a 3-D curtain wall.

A original curtain wall usually refers to the outside of a construction. It tends to be made of nonstructural, lightweight glass or metallic materials.

Unlike general concrete exteriors, the technology has no dead-load weight, allowing the formation of a more unique exterior.

But the 3-D version of the curtain wall takes the technology further.

It allows architects to design buildings in an asymmetrical form and can even make them curvy and multidimensional by using building information modeling software.

The first curtain wall was the Crystal Palace, constructed for the Great Exhibition held at Hyde Park in London in 1851. The cast-iron and plate-glass edifice was designed by former gardener Sir Joseph Paxton. Because of this spectacular building, the exhibition was often referred to as the “Crystal Palace Exhibition.”

Korean buildings with curtain wall structures started to appear in the late 1960s. But they began to blossom in the 1970s and 1980s when a market for aluminum curtain walls began to form here.

One building using the 3-D curtain wall that became a symbol in the nation’s capital is the 63 Building in Yeouido, western Seoul. 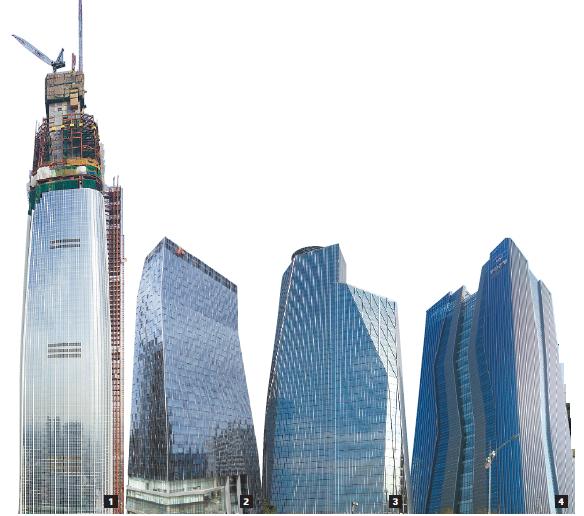 It took five years after the groundbreaking in 1980 to complete the skyscraper. With its construction, Korea’s aluminum architectural technology started to pick up speed.

The curtain wall market in Korea finally gained momentum in the 1990s as the fad for high-rise apartments and half-residential, half-commercial buildings started.

But in later years, the aluminum curtain wall industry was plagued with excessive competition that led to a cost-reduction race among construction companies. As a result, the technology hardly improved.

The local curtain wall industry was only able to take a step forward in the early 2000s.

Ahn Young-hoon, a mid-level official at LG Hausys, said that “buildings that no longer took the shape of the conventional square design and had their own characteristics started to appear.”

He explained that this occurred after the 3-D curtain wall technology’s development combined with growing demand from building owners who wanted more uniquely designed buildings and urban planners who wished to create a more beautiful city.

Buildings created with a 3-D curtain wall became the leading trend in the mid-2000s as various buildings with curved and flashy exteriors began to be erected.

Some of the most representative buildings built with the 3-D curtain wall are SK Telecom’s headquarters in Euljiro, downtown Seoul; Incheon International Airport; the IFC Mall in Yeouido; Northeast Trade Tower in Songdo, Incheon; Seoul City Hall; and the Dongdaemun Design Plaza.

The latter is particularly notable as it is the world’s biggest asymmetrical building.

The Lotte World Tower skyscraper, which is still under construction, is also attracting huge interest. The reinforced glass panels being affixed to the exterior of the 123-floor, 555-meter (1,821-foot) skyscraper number 20,938. On average, 178 units occupy a single floor.

Improvements in insulation technology for glass has also contributed to improving and expanding the 3-D curtain technology.

Buildings that use low-insulation glass are hot during summer and cold in winter. 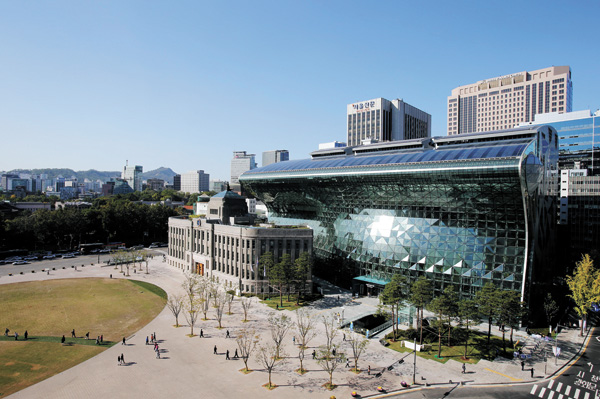 But recently, glass technology has improved. Low-E glass is a technology where metal or a metallic oxide is thinly coated on the surface of glass. This minimizes the movement of heat.

Thanks to the improved heat-trapping technology, the energy efficiency of buildings that use curtain walls has gone up.

Additionally, glass is becoming more diversified to include panes that create unique colors by reflecting sunlight. These have made it possible to construct more buildings with their own distinctive appearance.

The biggest setback regarding the 3-D curtain wall technology is the price. Although costs vary according to the materials used on the exterior, more than twice the amount is usually needed than when constructing a building with a concrete exterior.

The curtain wall market in Korea is estimated to be worth 1 trillion won ($898 million) a year. Currently four local companies - LG Hausys, Iljin Unisco, Eagon Corporation and Alu EnC - dominate half of the market.

The global market is worth 50 trillion won annually. It has been growing at a lightning-fast rate as major cities around the world have been competing in creating unique, attractive skylines. It is led by Schuco, which is based in Europe, Gartner and Kawneer.

Benson and Harmon in the United States and Yuanda of China are also expanding rapidly thanks to the growing demand in their home countries.

The world’s most famous buildings made with 3-D curtain wall technology include Shanghai Tower in China, Turning Torso in Sweden and Hearst Tower in the United States.

Although Korea has a relatively short history with this technology, local companies are expanding their presence in the global market thanks to their rapidly growing technologies.

LG Hausys not only has the ability to create 3-D, asymmetrical designs, but also has the unit grouping and panelization technology that simplifies the production of the different shapes of the panels, allowing increased productivity, as well as five-axis dimension fabrication technology that reduces process time while increasing precision.

It was this company that completed the exterior of the IFC Mall in Yeouido, Dongdaemun Design Plaza and the Busan Bank office.

LG Hausys is also the only company in Korea that can create explosion-proof curtain walls to withstand any external attacks and explosions.

The explosion-proof curtain wall developed by LG Hausys can withstand wind pressure 30 times stronger than that of super typhoon Maemi that hit in 2003, the strongest that ever blew through the peninsula.

Korean companies have been steadily gaining orders from overseas. Iljin Unisco won the order to build the curtain wall for a shopping mall in Hanoi, Vietnam, last year. And Eagon has won orders in Singapore and Angola.

As a result, it is supplying roughly 700 tons of aluminum curtain wall for the construction of Sangria Hotel in Ulaanbaatar and Mongolia’s new airport.