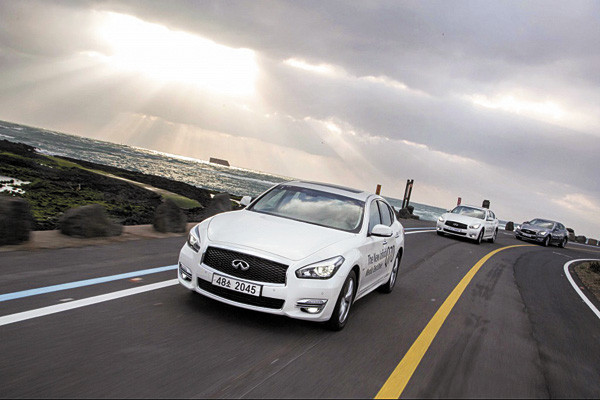 At a glance, the exterior of the Q70 resembles the Q50 as the company wanted to develop a Q series look, but some options not seen with Q50 were added. LED lights were added at the front and rear and the bumper upgraded to look more masculine. The company said the design was inspired by an image of a cheetah leaping forward toward prey.

The Q70 is available in Korean market in three trims, 3.0d, 3.7 and 3.7 AWD, and the Korea JoongAng Daily took the wheel of a 3.7 AWD on Jeju Island to see how it stacked up against other European E-segment sedans such as the Audi A6, BMW 5 Series and Mercedes-Benz E-Class.

The test drive was held on two courses, the first a hilly 66 kilometers (41 miles) between Lotte Hotel and Bontae Museum.

After leaving the hotel, a 700-meter two-lane straightaway offered a good chance to test the car’s acceleration in the sport mode. The Q70 responds quickly.

Earlier, it was hard to imagine the cheetah the company mentioned as the driver was driving it like he was going to a local retail discount store.

But turning on the sport mode button, it felt like the car was a beast that had just found food in wild.

The VQ37VHR V6 3.7-liter gasoline engine, which delivers 333 horsepower at 7,500 rpm and a maximum torque of 37 kilogram-meter, starts roaring and soon lets the driver feel its explosive speed.

The sound of the engine roaring and its quick response time is quite satisfactory, but it sometimes feels like the car is too light, meaning that it doesn’t grip the road particularly well at high speeds and on rough surfaces. 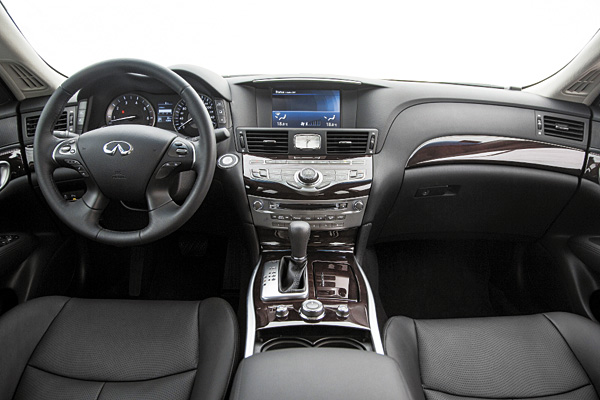 Interior design of Infiniti’s Q70 3.7 AWD, which sells for 65 million won (58,362), including the value-added tax. Provided by the company

It might be a characteristic that appeals to drivers who favor the more plush, classic ride common among German cars.

The car’s most attractive driving performance was seen in the wider curves of the second driving course on Hankyung and Godeok coastal road, which is about 67 kilometers.

The Q70’s balanced cornering offers a comfortable ride and it feels like the car responds quickly. It didn’t matter how much the course was winding, the car didn’t slip on roads that had snow until earlier in the day, and activating the snow mode makes the car grip the road better and increases safety in inclement weather conditions.

It let the driver enjoy the beautiful scenery of Jeju Island’s coastal areas.

Since Koreans favor diesel models, customers will be attracted to the Q70’s basic trim, the 3.0d, which has a 3.0-liter V6 turbo engine and rear-wheel drive. It offers 238 horsepower and 56.1 kilogram-meter of torque. Just like the Q50, it provides its maximum torque between 1,750 and 2,500 rpm, to maximize acceleration and response. The diesel model gets 11.7 kilometers per liter (33 miles per gallon), while the 3.7 AWD gasoline model is rated at 8.3 kilometers per liter.

The Q70 also provides many safety options that drivers will appreciate, including a predictive forward collision warning system and pre-crash seat belt system, which tightens the driver’s seat belt when a potential accident is detected. If the driver doesn’t respond to the situation, the system stops the vehicle by working with the intelligent brake assist.

In conclusion, the Q70 is a very attractive car. It reflects well what consumers seek in a driving experience, and its price range might make Koreans choose the Q70. 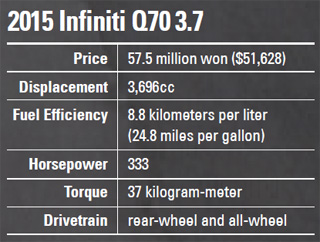