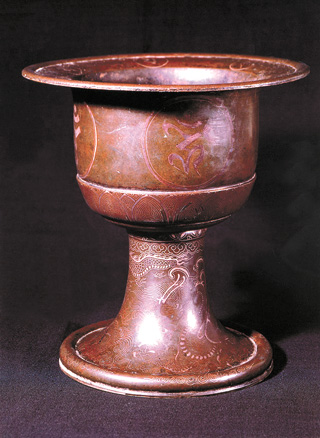 This bronze incense burner is located in Pyochung Temple in Miryang, South Gyeongsang.

It is a very refined work decorated with silver thread that is inlaid in the patterns engraved on the surface.

The incense burner consists of a body with a broad brim and a trumpet-shaped stand, which shows the typical style of the Goryeo Period (918-1392).

The part connecting the brim and body is curved and the edge around it gives a sense of stability.

The proportion of its width and height is almost 1 to 1, which shows a good balance.

In the upper side of the brim, there are six circles at regular intervals. Inside these circles, the letter beom (origin of world creation) is decorated with silver thread in the groove and clouds are engraved between them.

A cloud and dragon design decorates the stand and display the Goryeo Period’s advanced technique of silver thread inlays. There are 57 letters with silver thread inlays on the inside of the brim, which insinuated that it was produced in 1177, during the reign of King Myeongjong.

It is the oldest incense burner that exists in Korea today and has a significant meaning as a relic whose time period is known for certain.

According to the text written inside the stand, this incense burner was originally located not in the present Pyochungsa Temple but in Yongheungsa Temple in Changnyeong. However, it is not clear how it was relocated.