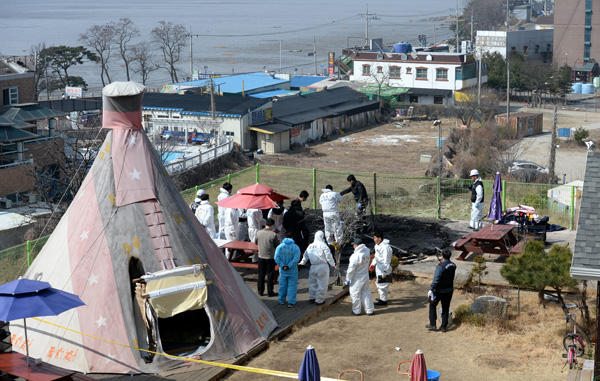 Firefighters and forensic officials investigate the scene of a tent fire at a campsite in Incheon on Sunday. Five died in the blaze and two were injured, receiving second-degree burns.[NEWSIS]

Five people were killed and two were injured in a fire that broke out at a campsite in Incheon early Sunday morning, raising questions about the country’s safety infrastructure as authorities suspect that faulty electrical equipment was the chief cause of the blaze.

Police officers investigating the incident said that the blaze affected one cone-shaped tent, about 16 square meters (172 square feet), at around 2:07 a.m. All five people inside were found dead when fire fighters arrived at the scene at 2:23 a.m.

There were four other tents and three guesthouses at the same campground.

Among the deceased was a 37-year-old man surnamed Lee and his two sons, ages 6 and 11. A 36-year-old man, only identified by his last name Cheon, and his 7-year-old son also died. Cheon and Lee were said to be close friends who took their two families on a camping trip.

The two injured were another of Lee’s sons, 8, and a 43-year-old man surnamed Park. The two were transported to a nearby hospital and are being treated for second-degree burns. Their injuries are not life-threatening, police said.

Park told officers that he was awakened by a raucous cry in the middle of the night and came to notice a large fire in the tent right next to his. The 8-year-old was standing near the entrance to the tepee-shaped tent and wailing when Park carried him out.

A college student who was near the burning tent was the first to call the fire department at around 2:13 a.m., roughly five minutes after the fire started. The first fire truck arrived 10 minutes later when the fire was still burning but the tent had collapsed.

With the precise cause of the incident still unclear, officers from Incheon Ganghwa Police Precinct are examining CCTV footage from the scene, and have requested assistance from forensics officers for a deeper analysis.

An electric panel used for heating is suspected to be the cause.

A police officer who asked not to be named said the security coverage showed a flash inside the tent at 2:07 a.m. and that it flared up in just five minutes. Another fire fighter who also asked for anonymity said the material the tent was made of is highly flammable and that people staying at the campsite had told them that all five fire extinguishers stationed nearby did not work.