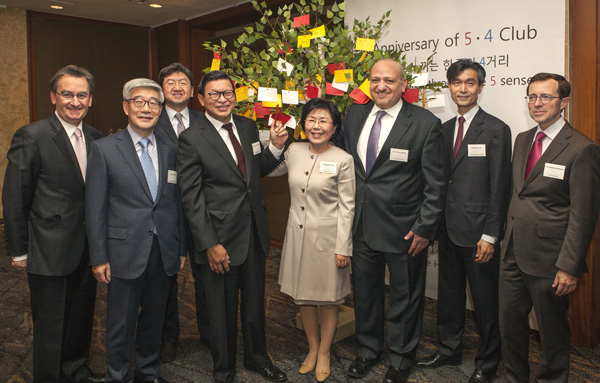 Street shops, food delivery service, an around-the-clock lifestyle, cosmetics and traditional crafts are just some of the cultural offerings in Korea that foreign visitors find most appealing, according to a recent study by the Corea Image Communication Institute (CICI).

Both foreigners and Koreans agreed that “fast-moving,” or bbali-bbali, was the best adjective to describe Korea, followed by “dynamic” and “culturally enriched,” CICI President Choi Jung-hwa said on Tuesday.

The survey results were announced at an event celebrating the second anniversary of the 5.4 Club, attended by approximately 60 diplomats and leaders in the cultural, economic and academic spheres who are group members.

The gathering was held at Lotte Hotel in central Seoul.

The 5.4 Club is a sub-unit of CICI, a nonprofit that aims to promote Korean culture overseas. It was founded by Choi and her husband, Didier Beltoise, the CEO and president of consulting firm Cs, to offer customized tourism information for foreign visitors, particularly influential figures.

The Internet and email survey was conducted by CICI between Feb. 11 and March 9 with 540 Koreans and foreigners who have visited the country.

According to the survey on visitors’ perceptions of Korea, 42.67 percent of foreigners said their favorite places to shop were street shops.

Korean streets are lined with colorful road shops, franchises that sell affordable but good-quality cosmetics that have especially gained popularity with tourists.

Those beat out traditional Korean shops and even night markets.

“This shows a disparity between what Koreans and foreigners perceive,” said Choi, “as well as the recent boom in the Korean cosmetic industry and its popularity overseas.”

Over half of the foreigners and Koreans surveyed by CICI found quick and efficient food delivery service in Korea most appealing. This also beat out Korea’s around-the clock culture, which came in second, at 22.61 percent for foreigners and 20.85 percent for Koreans.

Street food, however, was not as popular for foreigners, although 12.46 percent of Koreans responded that they believed foreigners would enjoy the various delights offered by street vendors, such as ddeokbokki (spicy rice cakes). “Street food, while popularized in the media, still appears to have a niche appeal for foreigners,” Choi added.

Both Koreans and foreigners agreed that the most important element in choosing accommodation was proximity to attractions, and the subway was the most used type of transportation.

Likewise, 83.19 percent of visitors said cost was not a primary consideration when selecting food.

“I really think that a club related to tourism is important because that is a way to create human links,” said Jerome Pasquier, the French Ambassador to Seoul and a member of the 5.4 Club. “I can really tell you that Korea is now more and more trendy in France. More and more French people are attracted by people. And people here help them discover different culture and cuisines.”

The 5.4 Club, launched in March 2013, upholds the slogan “Feeling Korea Through Five Senses and Four Themes.” Those themes are the primary ways in which visitors can enjoy Korea: through sightseeing, communication, eating and drinking, and arts and entertainment.