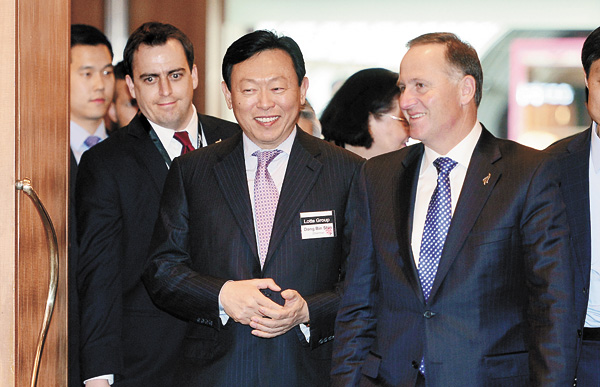 So far, the FTA hasn’t been seen as a huge benefit to Korea, because the country’s major export products to the country are already being shipped at a low or no tariffs, while local farmers fear their business may lose competitiveness against high-quality Kiwi agricultural, dairy and meat products.

However, Korea Trade-Investment Promotion Agency (Kotra) analysts say the FTA will give Korean products a competitive edge against similar goods from competitor countries like Japan and Europe, which are not FTA partners of New Zealand.

According to a survey by Kotra’s Auckland branch of 103 local companies, 48 percent said they would like to switch their suppliers to Korea after the Korea-New Zealand FTA takes effect.

Also, 88 percent of buyers said the FTA will boost overall trade volume between the two countries, displaying a high level of interest in Korean-made machinery, auto parts, food and textiles.

“New Zealand usually has levied low tariffs on most of its trade partners, because it heavily relies on imports for its supply of manufactured goods,” Kotra said in a statement Monday. “But as the market share of Korean cars has steadily risen, Korean auto parts will be the largest beneficiary of the Korea-New Zealand FTA.”

Other manufactured goods with bright export prospects include machinery and parts and construction materials like steel plates, Kotra said, because New Zealand recently started accelerating rebuilding the city of Christchurch, which was devastated by an earthquake in 2011. About 50,000 houses are expected to be built by 2028.

“From an exporter’s perspective, New Zealand may feel like a fastidious trade partner, because the country’s a small local market with highly diverse demands,” said Yang Eun-young, head of the trade support department at Kotra. “At the same time, this means the Kiwi market is a better fit for small Korean than conglomerates.”

“New Zealand is country with high purchasing power. Per capita GDP exceeds $40,000,” the groups wrote. “However, the country has a relatively weak manufacturing, which makes it a perfect trade partner for Korean manufactured goods,” the statement said. “Korean goods will gain price competitiveness so that they can equally compete against New Zealand’s other FTA partners, China and ASEAN.”

To celebrate the signing of the bilateral FTA, business leaders of both countries held an FTA application seminar hosted by KITA in Seoul on Monday morning.

In particular, retail businesses of the two countries on Monday afternoon inked two commercial agreements in herbal medicine and darts right after the signing of the FTA.

A distribution agreement was made between DartsKorea and New Zealand’s Puma Darts Limited in which the two companies will work for joint export of New Zealand darts and dartboards paired with Korean accessories to some 70 countries.

Key and Shin discussed ways to cooperate in the retail sector.