Hyundai’s focus is growth in China

Hyundai’s focus is growth in China 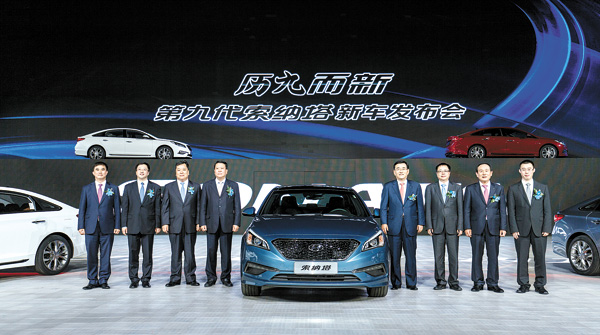 Hyundai Motor has announced plans to increase its presence in its biggest market, China.

According to the industry, the nation’s leading automaker will open about 80 dealerships in the country this year to bring its total to 1,000, as part of its work to expand its market share there and in response to recent expansion in China by the automaker’s U.S. and European rivals.

The move will make Beijing Hyundai, a joint venture with Beijing Automotive Group, the second carmaker to have more than 1,000 dealerships in the country after Shanghai GM, which has 1,269.

The new dealerships will open in central and western China, two areas that are being rapidly industrialized by the government. The company has been steadily increasing its number of dealerships in China by about 60 each year - from 802 to in 2012 to 860 in 2013 and to 920 last year. Rival automakers such as Shanghai Volkswagen, has 947 retail outlets in China while Dongfeng Nissan has 675 and Ichi Toyota has 510.

To enlarge its presence in the Chinese market, Hyundai Motor announced late last year that it will build two new factories in the country. Its fourth factory in China will be completed in 2016 in Changzhou, Hebei Province, and a fifth factory in Chongqing is projected to be finished in 2017.

In addition to the dealerships opening this year and the planned factories, Beijing Hyundai is also looking into opening more dealerships in the western and eastern coastal areas, where demand has been consistently increasing.

“The construction work for the fourth factory will likely begin next month, while the construction for the fifth factory will likely begin a month or two after the fourth facility begins,” Hwang Kwan-sik, spokesman of Hyundai Motor, told the Korea JoonAng Daily. “When the two factories are completed, we expect to sell about an average of 600,000 additional cars in China [per year].”

Dongfeng Yueda Kia, a joint venture between Dongfeng Motor and Kia Motors, a sister company of Hyundai Motor, will also open 100 additional shops to bring its total to 885 by the end of the year. Kia also needs to expand its sales channels because the company will increase the production capacity at its factory in Yancheng, Jiangsu Province, from 300,000 cars a year to 450,000 cars by 2016.

China is one of the most significant markets for the two Korean auto giants. They recorded combined sales of more than eight million cars last year and about 25 percent, or 1.84 million vehicles, were sold in China. The two automakers said they aim to sell 1.99 million units in China this year, which will be an increase of about 8 percent over last year if accomplished.

In February, Hyundai Motor sold 74,002 units in China while Kia Motors sold 45,510 units, there, giving the companies a combined market share of 10 percent (Hyundai with 6.2 percent and Kia with 3.8 percent). That figure was down 0.6 percent from a year ago, which was partially caused by a lack of supply, according to the company.

But Hyundai is attempting to boost those figures.

The company started selling a new version of the LF Sonata built specifically for China on Friday. The automaker said the model will be available in three different gasoline engines; Nu 2.0 MPI; Theta II 2.4 GDI or a Gamma 1.6 Turbo GDI engine. An in-house seven-speed dual-clutch transmission has been installed in the turbo model to provide better fuel efficiency and driving power.

The company said the new Sonata could lead the company’s sales in the competitive midsize car market in China, in which industry demand is expected to grow by 8.3 percent from a year ago to mark 1.54 million cars, thanks to the increasing middle class.