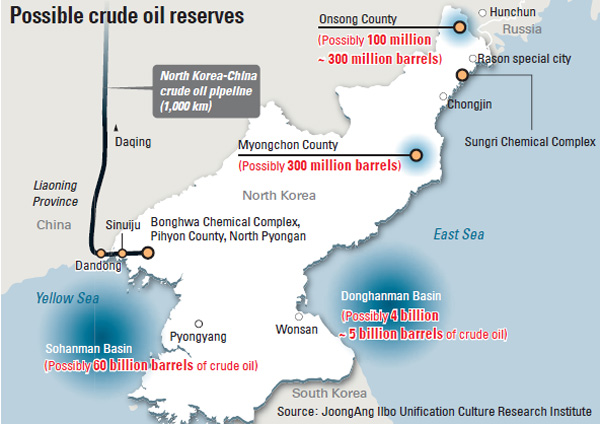 Are there crude oil reserves in North Korea?

Although the answer to that question is still equivocal, some foreign companies have jumped into exploring for crude oil in North Korea.

HBOil JSC of Mongolia purchased a 20 percent stake in Sungri Chemical Complex, North Korea’s state-run oil refinery, for $10 million in June 2013. HBOil JSC plans to explore inland crude oil deposits and gas fields in Rason, a border city in the northeastern tip of the country. In May last year, HBOil JSC opened an office in the Yanggakdo Hotel in Pyongyang to carry out the business.

Aminex, an Irish-Anglo oil and gas company, inked a 20-year deal in 2004 with North Korea’s state-run crude oil development company to explore crude oil reserves across the country. The London-based oil company estimated there would be crude oil reserves in the Donghanman Basin in the East Sea.

“North Korea has crude oil reserves of 4 billion to 5 billion barrels that we can drill,” argued Aminex’s CEO Bryan Hall. But in 2012, Aminex walked away from the deal, citing the rapidly changing political situation in North Korea.

“We estimate there are 60 billion to 90 billion barrels of crude oil reserves in North Korea,” said a North Korean economic official at the time.

If those arguments turn out to be true, North Korea has the eighth-largest crude oil reserves in the world, next to the United Arab Emirates.

Even if the deposits exist, it won’t be easy getting at them. There are two reasons, both related to drilling.

The first factor is cost. It costs more than $10 million to explore one mining lot. North Korea cannot afford it and has no choice but to depend on foreign investment.

North Korea imports crude from China and Russia. China exports crude oil from its Daqing oil field through a pipeline to Dandong, and then to Sinuiju, and finally to the Bonghwa Chemical Complex in Pihyon County, North Pyongan. It is a-1,000 kilometer-long pipeline. The Bonghwa Chemical Complex refines the crude and produces gasoline, kerosene, diesel, lubricants and aircraft fuel. It is reported that China has reduced crude oil supplies to North Korea as relations between the two countries have soured.

Russia exports crude by ship to North Korea as there is no pipeline between it and North Korea. Oil tankers depart from Vladivostok and sail to Rajin Port and Chongjin Port on the east coast of North Korea. The volume is smaller than from China, but Russia is replacing China gradually as a supplier.

North Korea does not levy tariffs on Russian crude that goes to the Sungri Chemical Complex, located near Rajin Port. Because of the tariff policy, Russian crude is much cheaper than Chinese. As crude oil prices have plunged recently, North Korea prefers importing crude to exploring for oil reserves in its territory.

“Though the North Korean government puts more weight on importing crude oil because of profitability now, it could resume exploring for oil reserves once oil prices rise,” said a source familiar with North Korean energy policy.