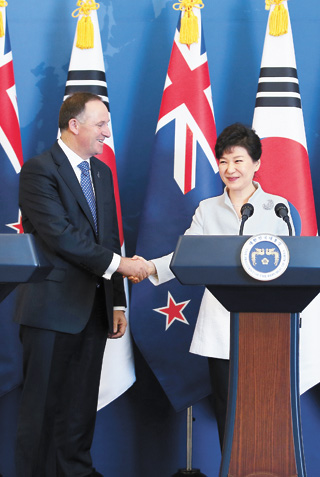 New Zealand Prime Minister John Key, left, shakes hands with Korean President Park Geun-hye at the end of their joint press conference at the presidential Blue House in Seoul on Monday. Key is currently in the country for a three-day visit to discuss ways to strengthen cooperation in a wide range of issues, including trade and the economy. [Joint Press Corps]

Korea signed a free trade agreement (FTA) with New Zealand Monday following a summit of the two countries’ leaders and after years of tough negotiations about agricultural and dairy products.

“It is an event that marks a significant point in the 53-year history of the two countries’ diplomatic relations,” Park said of the FTA signing. “With this agreement, the two countries created an important foundation for upgraded cooperation in a wide range of fields - not only the economy, but also culture, people-to-people exchanges, security and international cooperation.”

Key also expressed his satisfaction with the signing of the FTA. Although the negotiations were tough over the years, Park’s leadership contributed to the two countries’ signing of the agreement, he said.

The agreement is expected to boost Korea’s exports of tires, washing machines, freight cars and heavy construction machinery. According to the Blue House, 199 sensitive items including rice were excluded from tariff lifting, but a tax on beef will be lifted gradually over the next 15 years.

Bilateral trade was $3.256 billion as of last year.

According to the Blue House, imbalances in the two countries’ trade will be ameliorated by expanding exchange programs. New Zealand will offer an extended working holiday program by issuing 3,000 working holiday visas per year for Korean youths from 18 to 30 years old, up from the current 1,800.

An eight-week language program for 150 Korean students from farming and fishing villages will be offered and Korean experts in farming, fisheries and forestry industries will be offered training and research opportunities in New Zealand.

According to the Blue House, the Korea-New Zealand FTA was concluded after a series of direct communications between the two countries’ leaders whenever the negotiations faced a deadlock. The negotiations began in June 2009, but no progress was made after the talks ended in stalemate in May 2010.

During a bilateral summit in July 2013, Park and Key renewed their commitment to conclude the deal as soon as possible. After the FTA negotiations hit another obstacle, the two leaders had a telephone conversation last August and decided to appoint higher-level officials as chief negotiators. They also agreed to provide room for a “creative alternative” to encourage the negotiators to conclude the talks.

After their negotiators wrapped up the accord, the two leaders made the final agreement and announced the deal on the sidelines of the Group of 20 Summit last November.

According to the Blue House, New Zealand will complete its ratification process by as late as September and urged Korea to reciprocate a speedy ratification. Park promised efforts to seek the National Assembly’s cooperation.

The Blue House said the signing allows Korea to strengthen its FTA network with the world’s major economies. Among the 34 members of the Organization for Economic Cooperation and Development, Korea has signed FTAs with all but three countries: Japan, Israel and Mexico. Among the 12 Trans-Pacific Strategic Economic Partnership (TPP) members, Korea has formed FTA ties with 10 countries including New Zealand.

Park and Key agreed on close cooperation over Korea’s possible participation in the TPP.

Meanwhile, Key refused to answer a question during the joint press conference after the summit about the suspicion that his government had carried out a covert operation to spy on the candidates for the director-general of the World Trade Organization.

In 2013, Trade Minister Groser was one of nine candidates for the position, and reports from New Zealand said the operation targeted some of the candidates, including Dr. Bark Tae-ho of Korea.