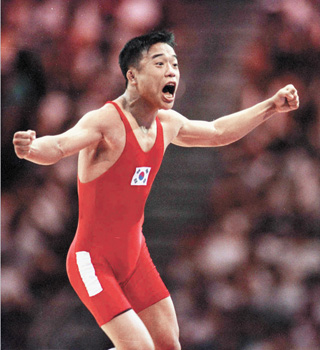 If Russia’s Aleksandr Karelin is considered the best heavyweight Greco-Roman wrestler in history, Sim Kwon-ho can probably match his status among the lightweights.

In what is still considered to be an unbreakable record, Sim was the first wrestler ever to achieve a career “grand slam” in two different weight classes. He won the Olympics, World Championships, Asian Games and Asian Championships in both the under 48-kilogram (106-pound) and under 54-kilogram categories of Greco-Roman wrestling.

In recognition of his achievement, the 1.57-meter (5-foot-2) wrestler was inducted into the International Federation of Associated Wrestling Styles (FILA) Hall of Fame last year. He is the first Asian Greco-Roman wrestler to become a Hall of Famer.

Sports pundits say that as a wrestler, Sim was both smart and technically gifted. But he has repeatedly said that his performance was based on continuous training and practice. 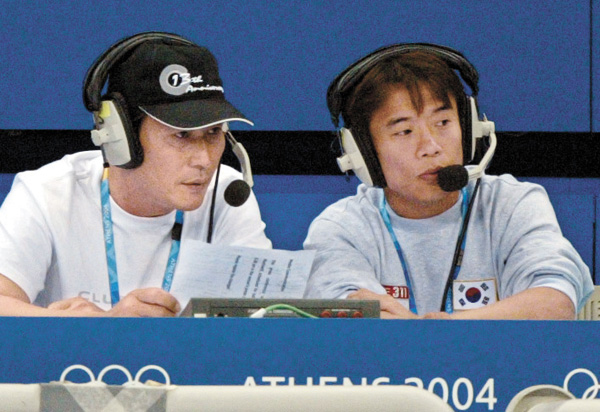 Sim, born in 1972, said he was a “rascal” as a child. He started learning Taekwondo at age 5, but in his first year at Moonwon Middle School in his hometown Seongnam, Gyeonggi, he saw some students wearing a weird, tight uniform and throwing and flipping each other.

Sim didn’t know the sport was wrestling and that it would become the focus of his life.

“I was a rascal who liked to exercise and move around,” Sim said in an interview with the JoongAng Ilbo in 2008. “One day, the physical education teacher stopped me and asked me to start wrestling and it all started from there.”

Sim then started to go through intense wrestling training, which he later said was “painful enough to make me think about quitting several times.” His parents, who ran a supermarket to support their three children, were opposed Sim wrestling at first, but as he started to show potential, they changed their mind.

In 1987, he won a gold medal in men’s under 32-kilogram freestyle wrestling at the National Junior Sports Festival in Busan. He was the first Gyeonggi wrestler to win gold at the event.

Although he wasn’t getting much taller, his wrestling skills were quickly improving. In his senior year at Seoul Physical Education High School, he became a member of the youth national team and entered Taereung National Training Center to work with top athletes.

However, as a freestyle wrestler, he didn’t make a big impact. In 1992, Sim took the advice of a Korea National Sport University professor and took up Greco-Roman wrestling.

In his first attempt to qualify to join the national team for the 1992 Summer Games in Barcelona, Kim won the men’s Greco-Roman under 48-kilogram event and proved his ability. But in the end, the Korea Wrestling Federation chose Goun Duk-young to represent Korea at the Olympics.

Sim first gained global attention when he won a bronze medal in the 1993 World Wrestling Championship in Sweden. He later said the event gave him a confidence boost and from there, he set out to conquer the wrestling world.

Already tabbed as the top contender, Sim took his first grand slam after winning gold in the 1996 Atlanta Olympics by beating Aleksandr Pavolov of Belarus 4-0 in the final.

Sim entered a slump in the new weight class. In 1997, he didn’t even make the national team member after losing to his rival and younger teammate Ha Tae-yeon. But after a year of adjusting, he took off again, winning the 1998 World Championship in Gavle, Sweden, as well as the 1998 Bangkok Asian Games and 1999 Asian Championship.

Sim qualified for the 2000 Sydney Olympics and made history by beating Wilber Sanchez of Cuba 8-0 in the finals, making him the first wrestler to achieve a grand slam in two weight classes. Sim also became the first Korean wrestler to win back-to-back gold medals in the Olympics.

“After I got one gold medal, I just enjoyed sports and my mind was comfortable because there was no pressure,” he said of his second Olympic gold medal. “Once I was at the top, I wanted to do it again and that desire pushed me to win again.”

After experiencing all the victories that wrestling had to offer, Sim announced his retirement in 2001 and started coaching the Korea Land & Housing Corporation’s wrestling team. In 2001, he received the Blue Dragon of the Order of Sport Merit, Korea’s highest award for athletes.

But to prove that he could win a gold medal in three consecutive Olympics, Sim returned to the mat in 2003. However, he failed to qualify for the 2004 Athens Olympics.

Sim then served as a commentator for local broadcasters and gained popularity with his “honest” coverage of the Games.

Although Sim has achieved many goals in his life, there is one thing he has yet to accomplish: marriage.

“During my time as wrestler, I put all my passion into wrestling and I liked to exercise instead of meeting girls,” he said. “I want to see more young players achieving grand slams and get into the Hall of Fame.”