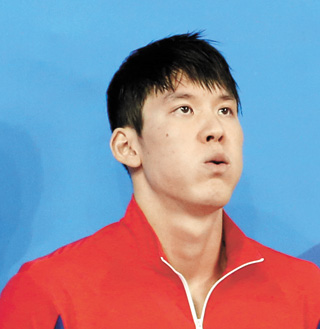 FINA said Park, who won the 400-meter freestyle at the 2008 Beijing Olympics, tested positive for testosterone in an out-of-competition doping control test on Sept. 3. The doping panel of FINA said the ban will be retroactive from that date and end March 2, 2016.

In addition, the doping panel decided that all results achieved by the 25-year-old swimmer on or after Sept. 3 will be annulled, and he will be required to forfeit any medals or prize money won since then.

This means Park has to return six medals - three individual and three team - he won at the Incheon Asian Games Sept. 19 to Oct. 4.

Park currently has 20 Asian Games medals, including six golds, more than any other Korean athlete. If he has to return the six he won in Incheon, that honor would go to shooter Park Byung-taek with 19 medals.

The suspension excludes Park from competing in this year’s FINA World Championships in Kazan, Russia, and jeopardizes his participation in the 2016 Rio de Janeiro Olympics.

Theoretically, Park would be cleared to race in the upcoming Summer Games as his suspension ends next March, while the Olympics start in August. But under a rule adopted by the Korean Olympic Committee (KOC) in July, an athlete who has been suspended for a positive drug test can’t be named to a national team for three years from the day the suspension ends, which means Park will not be eligible to race until March 2, 2019.

So far, the rule has not been applied to any Korean athlete. While some in the Korean swimming community say the KOC rule amounts to double punishment, the KOC said it has not considered any revisions.

Park contends he didn’t know that an injection later identified as “Nebido” from a Seoul doctor contained any substance banned by the World Anti-Doping Agency (WADA).

In February, prosecutors indicted the doctor on charges of professional negligence.

Park has 21 days to appeal the FINA decision to the Court of Arbitration for Sport, also in Lausanne.

He and his defense team plan to hold a press conference on their arrival in Korea today.

“It’s really sad that his positive test result was revealed in public before the hearing took place, because WADA also emphasizes the secrecy of cases prior to hearings and the announcement of decisions,” said Lee Jong-ha, a professor at Kyung Hee University Medical Center’s rehabilitation center who also leads Korea Baseball Organization anti-doping committee. “The case shows there is a problem with the system for managing top athletes. Top class athletes should be always careful when taking one single pill of medicine.”