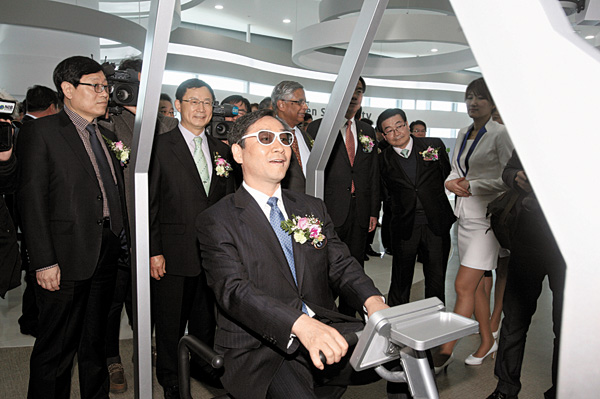 Incheon Mayor Yoo Jeong-bok tests an eco-bicycle at the new promotion office at the Incheon Free Economic Zone. Provided by the IFEZ

The Incheon Free Economic Zone (IFEZ) opened a relocated promotion office on Tuesday on the 33rd floor of its headquarters in G Tower, offering a 360-degree view of Songdo International City and Korea’s west coast.

The office consists of multiple areas that feature investment opportunities in Incheon and Songdo and consulting. In one, children can experience mud tidelands of the West Coast.

According to IFEZ data, the free economic zone attracted $5.1 billion in foreign direct investment as of the latter half of 2013 and is home to branches of 29 foreign companies.

The free economic zone consists of three districts: Songdo, Yeongjong and Cheongna. Songdo specializes in IT and biotechnology businesses, while Yeongjong is for shipping and tourism businesses, and Cheongna for financial and leisure industries.