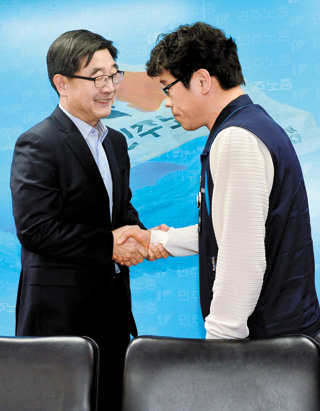 Minister of Employment and Labor Lee Ki-kweon, left, shakes hands with Han Sang-gyun, a leader of the Korea Confederation of Trade Unions, a leftleaning labor union group, at the confederation’s headquarters in central Seoul, Tuesday. Lee made his first visit since he took charge of the ministry in order to persuade union leaders to join ongoing trilateral negotiations among unions, management, and the government on labor market reforms. Changes being discussed would include narrowing the gap between working conditions of salaried and contract workers. Han said he thought the negotiations are superficial and should be stopped immediately. [NEWSIS]