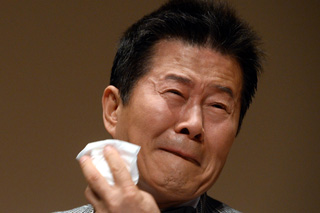 “I played some casino games for fun during my family trip [to the United States], but it isn’t true that I betted hundreds and thousands of dollars,” the 62-year-old said.

Tae is widely known as the king of trot, an old form of Korean pop in which singers fluctuate their voices to add a vibrating quality to the music, which has a heady nasal sound.

The gambling accusations first surfaced in the Sisa Journal USA, published by Korean-Americans in the United States.

“It was my dream trip,” he continued, bursting into tears before reporters. “Living in the States, I always wanted to go on a trip with my family but I couldn’t. And this time, I could finally go with my family for my birthday.”

A lawyer representing Tae was also present at the press conference in Yongsan District, central Seoul, and confirmed that it was a family occasion to mark the singer’s 61st birthday.

“After this press conference, we will take all appropriate legal measures [against the publication] and submit all the documents and evidence we have shown [to you] today.”

On Tuesday, Tae shared an audio clip in which the head of Sisa Journal USA asked for $25,000 from one of Tae’s acquaintances in return for covering up the scandal.

During the conference, he also made a phone call to the general manager of the Los Angeles hotel, who said the singer did not stay in a VIP room, but that he did chip in at a table where players must bet $10 minimum, and played for about an hour.