Loan demand’s through the roof

Loan demand’s through the roof 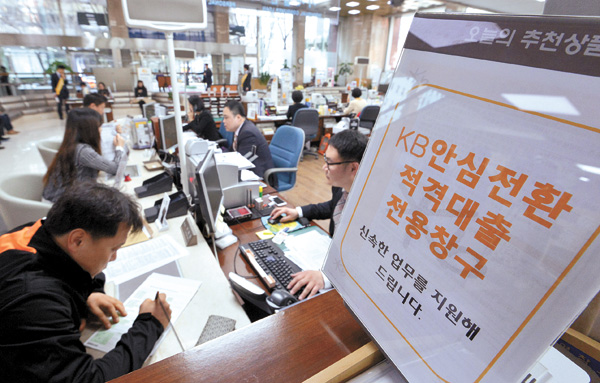 Visitors inquiring over converting their current mortgage loans to a newly-launched, government-promoted mortgage program with a lowered, fixed-rate of average 2.5 percent, at the Kookmin Bank’s headquarters in Yeouido, western Seoul, on Tuesday. [NEWSIS]

As soon as KB Kookmin Bank in Yeouido, Seoul, opened its doors, more than a dozen of people rushed in to convert their existing mortgage loans to a government-promoted loan program that allows longer terms with an initial interest rate of 2.5 percent, about 1 percentage point less than the prevailing rate.

The bank saw a continuous flow of customers throughout the day. The huge turnout of customers inquiring about the new mortgage program occurred at other participating banks, as well.

“I feel relieved as there is no possibility that the lending rate would change in the future,” said Park Han-suk, 57-year-old housewife who got her loan from the Kookmin Bank in Yeouido. “With a low fixed rate, this loan is the best I have ever seen.”

It was the first day of the government-backed mortgage program, and crowds turned up at bank windows in the greater Seoul area in hopes of shaving even the slightest amount off their interest rates.

The turnout surprised bankers, the financial market and the Financial Services Commission (FSC), architect of the new program.

In an effort to reduce financial risks in the event of an increase in the benchmark rate by the central bank, the FSC in January created a loan program where commercial banks will promote fixed-rate loans at annual interest rates of between 2.55 and 2.6 percent for terms of 10, 15, 20 or 30 years. The interest rates could be adjusted every five years. The offered interest rate is roughly 1 percentage point less than existing loans.

While the central bank has taken a more aggressive stance in boosting the domestic economy by lowering the benchmark interest rate three times since the second half of last year, household debt has been expanding at an alarming rate.

As of the end of 2014, household debt including credit card purchases and loans amounted to nearly 1,090 trillion won. With the latest rate cut to an all-time low of 1.75 percent and another rate cut expected in May, household loans are expected to increase at a faster rate.

Under the new program designed by the FSC, consumers who borrowed 500 million won at the maximum for a 900 million won house at least a year ago are eligible to convert their current loan contracts. Statistically, as many as 2 million people could qualify for the program.

Some office workers even took time out of their day to rush to the bank to convert existing loans.

“I came here in the middle of work after reading the newspaper article saying the release of this loan would be this morning,” said a 44-year-old woman who works in Yeouido, as filled out an application for the mortgage program. “Although I will feel the burden of paying back the principal from now on, about 300 million, I chose this loan because of the low fixed rate.”

Kookmin Bank dispatched a total of 183 employees to local branches to handle demand for the loan.

“About 30 or 40 percent of visitors prepared their application forms in advance,” said Ahn Yong-su, an official at the bank’s headquarters. “As of 2 p.m., our branch had received 25 applications.”

At a nearby Shinhan Bank branch in Yeouido, the situation was similar, said Bae Dong-gu, deputy general manager at the branch.

“Some people failed to get the loan because they were not eligible,” he said. “They hurried to visit the bank, but found they did not check the details of application. They said they thought they would be unconditionally eligible if they had any kind of mortgage.”

Just an hour after opening, 5,941 mortgages worth a combined 781 billion won were shifted to the new program.

As of the closing time at 6 p.m. on Tuesday, a total of 26,877 mortgages worth 3.3 trillion won were switched to the new program at branches of 16 commercial banks nationwide, according to the Financial Services Commission. The FSC has allocated 5 trillion won for the program this month, and expectations are growing that the commission could raise the ceiling by an additional 5 trillion won, given the fact that Chairman Yim Jong-ryong ordered officials to “respond flexibly [to demand for the mortgage program] if there are too many people who want to get it, not paying too much attention to the lending limit [for March] of 5 trillion won.”

Because of the overwhelming popularity of the program, the FSC lifted the 5 trillion won limit.

“We will allow banks to make the loans until the aggregate amount of funds, 20 trillion won, is borrowed,” said Gwon Dae-yeong, a FSC official. “We also asked banks to extend their opening hours to deal with applicants.”