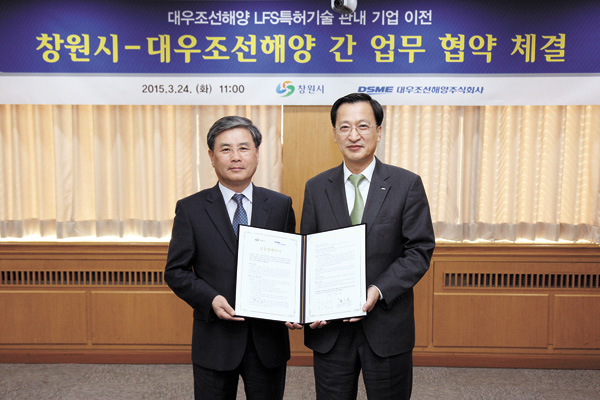 Daewoo Shipbuilding and Marine Engineering (DSME) said Tuesday it has signed a memorandum of understanding (MoU) with the Changwon City Government in South Gyeongsang to share its patent technology for ships fueled by liquefied natural gas (LNG), known as LFS.

The LFS technology has gained attention in the industry because it is considered essential to building LNG-fueled vessels and is relatively cheaper than building oil-fueled ships. LFS are also more environmentally friendly, with average greenhouse gas emissions of about 20 percent less than oil-fueled vessels because they don’t generate sulfuric acid.

DSME will issue a production license after teaching the technology used in its LNG fuel supply system to Changwon-based shipbuilding parts businesses so they can independently manufacture gas tanks. The company and the municipal government will also cooperate in LNG bunkering to develop shipbuilding materials.

The shipbuilder said it expects the MoU signing to help parts suppliers in Changwon that are having a tough time due to the global slump in the industry. The company added that it will hold informational sessions in April and May to inform shipbuilding parts makers about its technology.

“Through this MoU, we expect to strengthen our partnership with local businesses in Changwon,” said Urm Hang-sub, executive vice president of DSME.