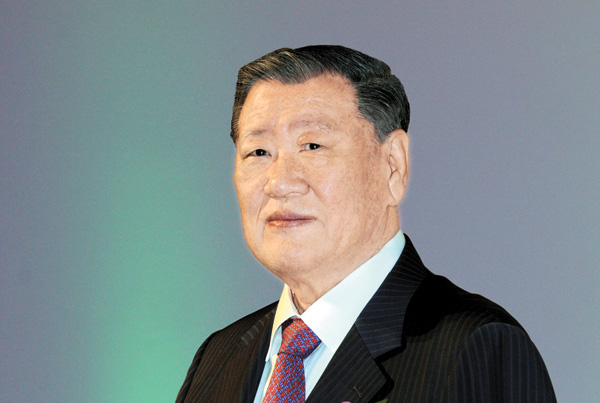 Hyundai Motor Group Chairman Chung Mong-koo left for the United States on Tuesday to review his company’s progress in the market, which is expected to be one of the biggest challenges for Hyundai Motor and Kia Motors this year.

The depreciation of the euro and yen and America’s demand for pickup trucks, which Hyundai Motor and Kia Motors don’t sell in the country, are expected to exacerbate the struggle.

Hyundai Motor said Chung left for the United States on Tuesday afternoon and will stay there for five days to check factories and sales offices and to discuss production and marketing strategies with local directors.

During the trip, Chung will visit the production lines at Hyundai Motor’s factory in Alabama and Kia Motors’ factory in Georgia to encourage higher quality products. The boss will check the production process of Kia Motors’ new Sorento SUV and will ensure that employees are prepared to start production of the automaker’s new K-5 and Avante sedans. He will also visit a Kia factory that is being built in Mexico.

“We will have tough competition against our U.S., Japanese and European rivals this year,” Chung said before he left for the United States. “We need to improve our strengths even more in order to deal with the situation.”

The combined market share of Kia and Hyundai in the United States was 7.95 percent last year, the first time it has fallen below 8 percent since 2011.

To recover its market share, Hyundai Motor will likely focus on SUVs, which have been popular in America in recent years. The U.S. SUV market grows by an average of 14.4 percent each year, according to the automaker.

The company will start selling the newest Tucson SUV in the U.S. in the second half of this year and will offer discounts on Santa Fe SUVs.

While in the United States, Chung will also consider whether the company should start producing the Santa Cruz, a concept pickup truck it introduced in January at the North American International Auto Show. Local media and Reuters recently reported that Hyundai is seriously considering mass-producing pickups, citing Park Byung-cheol, a director of Hyundai Motor’s R&D division.

The company has been very hesitant to produce trucks because it is a tough market to penetrate due to domination by traditional powers such as GM and Toyota.

“We first need to expand our market share in the growing SUV market with our new models [such as Sorento and Tucson],” the chairman said. “We also need to provide innovative and creative ideas to improve our competitiveness in the passenger car business.”

Hyundai Motor and Kia Motors aim to sell 1.41 million in the United States this year, which would be an 8 percent increase over last year if accomplished.