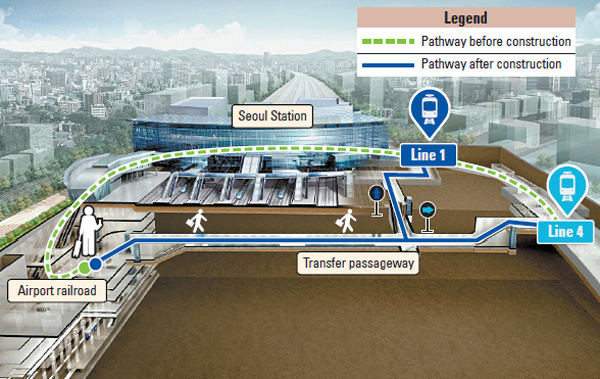 A new transfer passageway is set to open Saturday in Seoul Station. Provided by KORAIL

A long-awaited addition is being made to Seoul Station, with a new transfer passageway to the Incheon Airport Railroad opening on Saturday.

The station, at the center of the Seoul Metro system, is an intersection for lines No. 1, 4 and the airport railroad. But in the past, transferring from the airport railroad to the metro lines has been extremely inconvenient. Without a direct path, passengers had to exit at the gates on basement level three, and then push through the station’s chaotic waiting room filled with departing or arriving KTX train passengers on level two.

With the new passageway, transferring will become much easier. The 304-meter (1,000-foot) path will help save ten minutes for line No. 4 transfers, requiring just five minutes on foot.

In the case of line No. 1 transfers, the previously twelve-minute transfer will now take only seven minutes.

Another benefit is that passengers save additional fees that used to incur from making a transfer. Originally, passengers with a single ride pass on the airport railroad paid for another fare to transfer to the metro. When the direct path opens, transferring will not require passengers to pay for an additional ride.

One thing to note, however, is that transfers must be made through the new passageway for these benefits and other transfer discounts to be provided. Old route users will still be charged for another ride.

The new passageway is expected to be welcomed especially by foreigners visiting Seoul’s top tourist sites. In the past, tourists making their way to Myeong-dong had to transfer to line No. 2 at Hongik University Station, getting off a few stops later at Euljiro 1-ga Station. Although this is fairly close to Myeong-dong, tourists had to walk quite a bit to get to the main streets of the famous shopping district. Now, they can avoid the trouble and get off at the exact station if they transfer to line No. 4 at Seoul Station. For tourists headed to the Dongdaemun Market or Dongdaemun Digital Plaza, transferring to line No. 4 will also provide the optimal route.