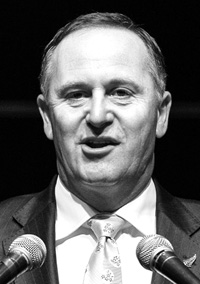 New Zealand’s Prime Minister John Key welcomed the signing of a bilateral free trade agreement (FTA) with Korea on Tuesday at a business forum in Seoul, highlighting it as part of his country’s focus on integrating with Asia.

“History tells us in New Zealand that FTAs that are signed are massively more successful than we expect they would be,” Key said at the New Zealand Chamber Business Breakfast Forum at the Grand Hyatt Hotel in central Seoul.

Accompanied by a delegation that included 38 business leaders, the prime minister witnessed the signing of the bilateral FTA on Monday by Korean Trade Minister Yoon Sang-jick and his New Zealand counterpart Tim Groser at the Blue House.

Key added at the forum that, in the case of the China-New Zealand FTA signed in 2008, “the actual result was 11 times more successful than they thought it would be.”

Similarly, in regard to the new Korea-New Zealand FTA, which had been in the works “for a very long time,” he said, “I suspect it would do a lot better than expected.”

Under the trade deal, which took six years to negotiate, New Zealand will lift all tariffs on Korean imports over the next seven years.

Korea will also phase out tariffs on more than 96.4 percent of the products it imports from New Zealand within the next 15 years.

“It’s hard not to believe Asia is going to be the powerhouse of economic growth,” Key said as he addressed over 150 chamber members, business leaders and members of the media, adding that integration into Asia was a top priority.

Factors driving economic growth in New Zealand include strong migration, a demand for infrastructure, investments in railways and roads, as well as the rebuilding of Christchurch after the earthquake in 2011, he continued.

“New Zealand is growing at a faster rate than most other .?.?. countries [in the Organization for Economic Cooperation and Development],” he said.

When asked about the most difficult part in sealing the Korea-New Zealand free trade pact, Key replied, “Ultimately agriculture, though not because agriculture is so threatening to the Korean market, because we are complementary.”

“Korean consumers,” he said, “want the products we are selling into this market. What’s more, Korea is negotiating free trade agreements with lots of countries that we compete with.” The products include wine, avocado and honey.

“Inevitably what is happening around the world as countries industrialize and grow is that the nature of the way they undertake agriculture is changing; it’s changing in New Zealand as well. It’s moving from a smaller family-size to a much larger, sophisticated operation. This causes domestic issues which government today is conscious of.”

This marks Key’s fourth visit to Korea in the past five years.

Two-way trade between Korea and New Zealand is currently at 3.5 trillion won ($3.1 billion) per year, according to the Kiwi Chamber of Commerce.

“The FTA is a reason to really invest in the relationship, and it moves beyond the place where you sell goods and services to a place where you try to build a long-term partnership,” Key said.

Korea is New Zealand’s sixth-largest export destination for goods and services, and industrial goods, forestry and dairy are its largest exports.

On average, total trade between the two countries grew 9 percent per annum over the past five years, the chamber said.

New Zealand is also one of the founding member countries for the China-led Asian Infrastructure Investment Bank.

Korea is expected to reach a decision on whether to join the bank by the end of the month.